Thing about Vornheim is that Zak was thinking about layout possibilities at the very start of the project. It was all about making the book useful as a thing at the table, rather than having the book just be the incidental vessel for the information stored within it.

The most radical manifestations of that focus is the fact that the physical (hard)covers of the book will have charts on them, where you roll on the chart to get results.

No, not roll the dice then look up the results on the chart, but physically drop the dice on the surface and where they land gives the result.

There's game stuff inside the covers on the endpapers, too.

And I had a rather clever contribution to the whole thing (if I do say so myself), the book will also have a dust jacket. The outside will be the usual cover image with sales mumbo jumbo on the back. The inside of the dust jacket will be the map of Vornheim.

Less impressive, but just as useful, was Zak's insistence that related information be on facing pages. Two page chart? Need to be on a page spread. The location maps and their keys? On facing pages. No flipping! Of course there's also a ton of things that don't need such attention, and everything in the book needs to be put together in an order that A- makes sense for the overall flow of the book, and B- produces all these necessary page spread combos.

Now I could do this page order building and rebuilding on my computer here. I have the technology. But that's absolutely maddening for reasons I can't really describe (besides my computer being the cheapest I could get in 2007 and it's 2011 and I'm dealing with tons of art and graphics and ARRGHHH...). So I'd rather do it this way: 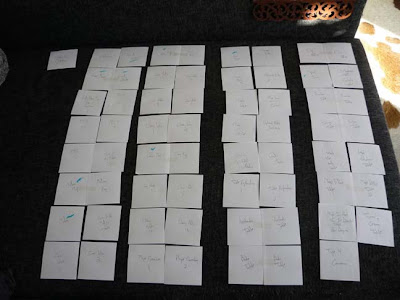 Each post-it note is one page, I tape the must-spreads together, and just start moving them around until they fit!

Now to just keep the dog off the couch until Zak gives the thumbs up or down on it.

As for content, it's about 50/50 between Zak's Vornheim stuff and general-use city stuff.