I do want to say a bit here because I know people are going to lose their minds.

Yes, the stretch goals go all the way to $150,000. No, I don't really expect to draw that much money (but PROVE ME WRONG, PLEASE!), but there is a reason behind it:

Basically, if offering standalone Rules & Magic books, it only makes sense to offer them in bundles. But since paper stock and all that won't be decided on until the early fall, there is no way to tell how much each book weighs, so determining postage for a group of them is impossible, and it would be a total disaster if I lowballed my postage budgeting for potentially hundreds of people.

Offering new adventures by top names was the best way I could think of to offer everyone an opportunity to fill that box up as close to 4999g as possible, absolutely PACK IT with top quality NEW STUFF, without asking you to pay any more than you were for the rulebooks.

And factoring in writing (four figures per adventure, I expect world class work from the famous vets and from the people you don't yet know... and there is no excuse not to pay people well when prefunding before giving the go sign), art (four figures per adventure, these adventures will all be top class)... and Alfrey, Engström, Poag, Robertson, and Zak are getting paid the writer AND artist shares since they're doing both on their projects... plus layout and editing, then printing, and factoring in IndieGoGo's cut and including that a funded adventure means a load more of hardcovers have also been reserved, that $7500 per project disappears real quick.

In fact, this whole campaign has been designed to be almost revenue-neutral for me. I say "almost," I did leave myself a small buffer against unforeseen expenses, but the money you pay in now is for the other creators, and the printer, and the post office. Not for me. I will take my profits from the sales afterwards when they're available as PDFs and the adventures go into distro. (which will largely go right back into the next releases anyway...)

So I've set the stage. Assembled one hell of a crew of adventure writers. It's up to you to actually put this into motion and blast this thing into orbit.

And if it goes well, next year I'll figure out something heavy BRAND NEW thing to release and  we'll do this all over again with a different crew of all-stars.
Posted by JimLotFP at 12:18 AM 11 comments:

I received this today, got permission to post it:

"My group has just played through Tower of the Stargazer (and believe it or not none of them died!). It was great fun and wife has even written a ballad, composed by a bard during the carousing funded with the gold found in the dungeon (quick google translation, but should be ok):

(the original Italian version is here)

Among them, the great warrior Calistasio
with a magnificent steed
Derrimaldeo of the Golden Dawn
whose wart offended decorum

Dargan followed with sharp ingenuity
ready to explore the depths
Hedstrom the barbarian whose speech
was poor, but mighty in arms

Behold, suddenly in a room
that villain with his boldness
proved to be an old charmer
imprisoned by his servant

But finally, with his usual cleverness Dargan
in a pebble found the key
and looking beyond appearance
understood the essence of the levers

I relate this adventure as a bard
There seems to be nothing worthy of respect?
Perhaps because there were no killings
battles or conquests of bastions

Do you think the value of the hero
is only in the fight and fuss?
I say no, not just this
and I'll explain why oh quick:

our four worthy adventurers
deserve beautiful verses and thoughts
since they stopped at nothing
wonders, mysteries and horrors they faced

Thanks to the courage they found the treasure
we'll sing of them and their cunning
but what deserves them a place in the annals
is the parties, and the bacchanalian revelry

In fact, that night was memorable
to the city droves and legions rushed
to be there in the great celebration
they must have been more than eleven hundred!

Music and jumps, wine and rivers of beer
in the street beautiful scents of roasted boar
and all ate, knights and fools
a painter immortalized the great revelry, too

Many other deeds the heroes did
perhaps more noble, but always for us
will remain the eternal memory of Retoril
that night when all hell broke loose!"
Posted by JimLotFP at 11:43 PM 1 comment:

Email ThisBlogThis!Share to TwitterShare to FacebookShare to Pinterest
Labels: Tower of the Stargazer

This is What Happens When You Reach Stretch Goals 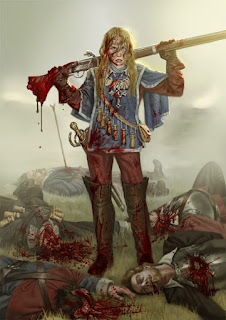 Insert pithy caption concerning how musketeers are usually such swashbuckling ninnies/LotFP art is soooo misogynistic/how a musket is sooo useless since it's pretty much a one-shot-per-combat weapon/"Bring Your Game into the (Early) Modern Age."

Anyway, this is one of the two color pieces the stretch goal of the last crowdfunding campaign bought.
Posted by JimLotFP at 1:08 AM 18 comments:

It's what LotFP's been missing, and what The God that Crawls is going to give. 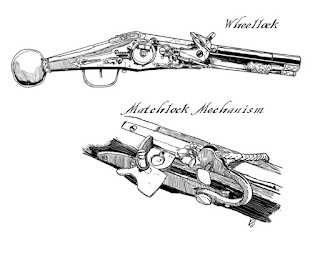 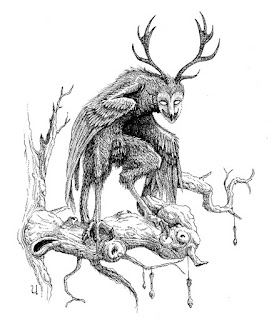 And our other entries (in order by filename): 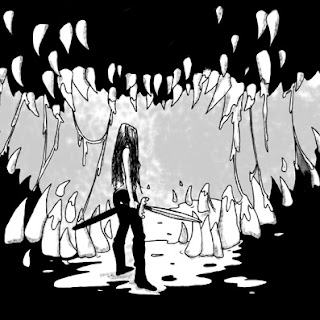 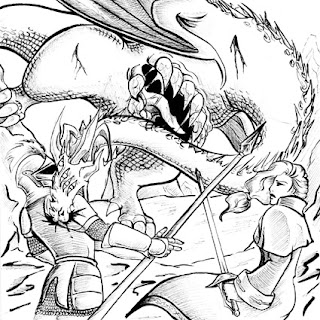 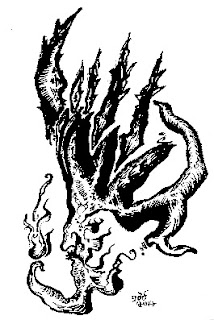 For April... no prize, just bragging rights... here is the topic:


The PCs are resting peacefully at an inn after a long day's travel/adventuring/saving the world/robbing the peasants/whatever. Something strange and evil has followed them there and is about to strike!

Email your entries to lotfp@lotfp.com with the subject name Evil Inn! Include your name and website so your pic can get you some fame. All entries will be posted here at the beginning of May.