Tales of the Scarecrow: Released at Dragonmeet!

New release for Dragonmeet: Tales of the Scarecrow! It's a limited run of 250 copies, cover by Jason Rainville and graphic design and interior art by Jez Gordon and written by James Edward Raggi IV. 8 pages of experimental horror, dread magic, and campaign-bending madness.

If you buy £10 or more worth of stuff at the LotFP table, you get it free, otherwise it'll cost you £3 (2£ for Gardening Society members - bring your card!). While supplies last of course.

The secret word for today is LATE.

Basically, to be able to ship anything out before Christmas I would have had to get it to the printer last week. Didn't happen.

The hardcover is still in layout, a process taking much longer than I figured. That's all my fault, my layout guy is doing a great job. The Rules portion has been completed and some new art to fit the new layout has been commissioned. Still waiting on the Magic portion of the book and that'll probably need some new art too.

You can download an art-free version of the Rules portion of the book here. Maybe we can catch an error or two before it goes to press, but if nothing else I hope you agree that the book is much cleaner and easier to look at now.

Ken Hite's Qelong adventure was turned in awhile back but playtesting has taken much more time than anticipated. Again, that's my fault. His adventure was much more wide open with unlimited possibilities (it's a sandbox/mini-setting really, very old school in setup) but since he doesn't normally work in this sphere of gaming I thought it would be more responsible and better for his reputation and mine to make sure it got decent playtime before release. Actual play has revealed some weaknesses in the presentation (not the actual stuff) and that's being taken care of. The time needed to be taken.

Vincent Baker turned in a Seclusium that was over twice as long as expected/required (yes I'm paying him more than originally agreed) so this is now going to be a hardcover book. Right now Vince is working on the revision suggestions I'd sent back to him (mainly presentation sorts of things) but it'll still need editing/layout/art.

Dave Brockie recently updated his status with Towers Two here. It's an adventure he had invented and run back in the day, and has been putting together the text for publication while on tour.

Kelvin Green's nearing completion on Horror Among Thieves and has been playing it along the development cycle and including rough design work as he's been working so when it's turned in, final production should be easy. We're also looking at including some of his earlier work as a bonus section for this book (yes he'd get paid more).

Jeff Rients has turned in the basic Broodmother text but not yet the maps so giving it some playtime isn't yet possible. This book will also be bigger than originally promised, as I've submitted a list of Jeff's previous work to him to be included with this book as a bonus section after the full-length adventure (yes, I'm paying him more for this).

Still waiting on Rob Conley's sandbox (based on the English Civil War if the cover art previously posted didn't give it away). The 64 page adventure I'll be sending to the larger July contributors is all written and just needs editing and layout (no art in this one).

There is a great possibility that the hardcover/Hite adventure will be ready at around the same time as the July adventures stuff. If that's the case, they will all ship together. No reason to spend the 5000€ or so extra just to have extra shippings. However, because shipping costs were factored in to both campaigns, if stuff from both campaigns ship together, people that participated in both will get a free brand new rules supplement that I'm nearing completion on.

Now, if you're thinking "GRRRRRRR" at the tardiness of it all, take heart: All the printing and shipping expenses tied into these releases that I expected to pay in 2012? Since they won't be done until 2013, that stockpile of money I have to pay for that is going to count as profit for 2012 so I'll get taxed on that (and being self-employed I'll have to pay 2013's taxes through the year based on 2012's income) so this isn't just me having a party being late over here.There are real and very significant costs involved. (not to mention if the printer raises rates and if the post office raises rates - which they've already done since the crowdfunding efforts this year). Plus the crowdfunding effort for early 2013 - originally scheduled to start January 1 - to fund the Free RPG Day material has to be delayed until all the outstanding stuff is at the very least given to the printer, and I've already commissioned $2000 worth of art on that and the whole project's in danger because of the timing. None of this is your concern (none of this is going to break the company), just communicating to you that I'm not just jerking chains for the hell of it.

On the plus side, everything I've seen for any of the outstanding projects is in fact outstanding. I think taking the time to make sure it's all done right and the best we can is better than to shovel it out the door as fast as we can.

So I do apologize for being overoptimistic about the timing of everything - that's totally my fault - and thank you for you patience. We're all putting in effort to give you more than you were expecting. Awesomeness is coming.

(Tales of the Scarecrow is in the final phase now, should be to the printer Monday and available at Dragonmeet. Doing the small-run thing with this one, like Death Love Doom and Joop van Ooms, so it has a much shorter turnaround time. Will be 8 pages, a very short thing. Zzarchov's Scenic Dunnsmouth has basic layouts done and is in the art phase. I'm working on a rules supplement concerning magic and of course the Early Modern supplement gets ever closer to completion. Plus various people - most notably Zak with his Red and Pleasant Land - are hard at work on material to be released in 2013. We will rock.)

(comments on this post can be made here.)
Posted by JimLotFP at 12:48 PM

Everyone who went in for $30+ in the July Adventures campaign is getting a Robert S Conley sandbox. Things are going a bit slower on all those than originally anticipated (surprise, surprise... *sigh*), but here's the cover for that sandbox exclusive by Jason Rainville: 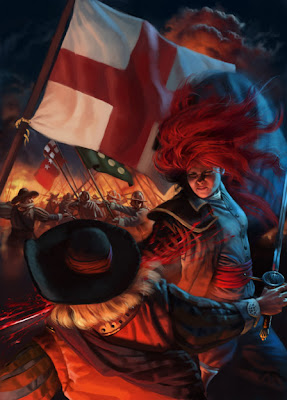