One of the books at the printer right now and a week or two or whenever away from going on sale is Zak S' A Red & Pleasant Land. This is LotFP's major release for the year, and perhaps our biggest release ever. It's time to tell you more about it,

"A terrible Red King wars with an awful Queen, and together they battle into being a rigid, wrong world..." A rough concept pitch might be "Dracula vs. Bathory in the world of Alice in Wonderland." But it's far weirder than that.

Zak showed an unfinished PDF to some people and we got some quotes:

"How lucky are we? Once again we get to experience the artistry and art, the cantankerous smarts, the dissident gaming philosophy of Zak S. It's inadequate to call _Red & Pleasant Land_ brilliant. With alchemist swagger, Zak takes the base matter of well-worn fantasy standards and our cheerful nerd hobbies, and makes the strangest gold."
-China Miéville

"God, it's so beautiful, I love this. It just makes D&D look so fucking now."
-Molly Crabapple

"It should be next to impossible to do anything original with Dracula or Alice, but Zak S demonstrates instead that it's next to impossible for him to put out a bad game book. He trails his barbed artistic and gaming sensibilities through these two modern myths and emerges with something more than a mashup or a collage: it's a necromantic restoration of a nightmare that never was."
-Kenneth Hite

(These quotes will appear on the back cover of the book in abbreviated form, for space and branding reasons.)

Because I'm just the publisher and not creatively involved, I want to tell you about the physical format before the contents. 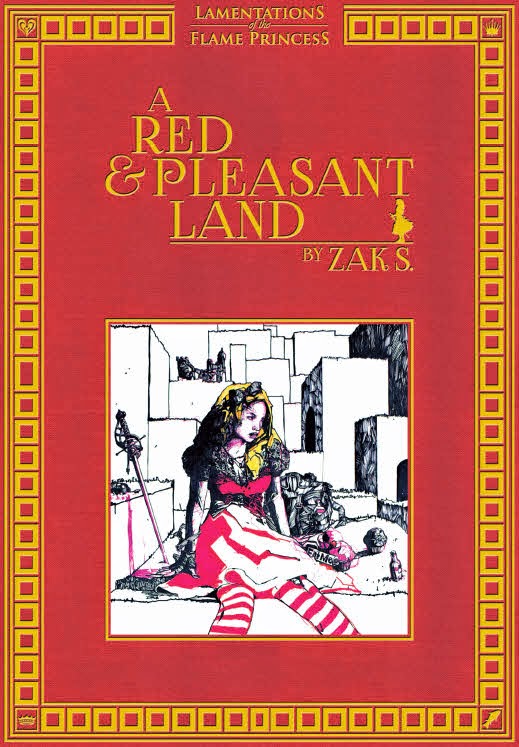 It's going to be a 192 page full color hardcover. But because the book isn't done yet, we can't adequately show you how the book will be. That cover pic there is an approximation: The red will be cloth, and the image there will be pressed into it. The yellow will be embedded metallic golden foil. The interior pages will be nice and rich as well, as we're using the same paper stock that we used for Carcosa. I don't know if we'll achieve the goal of being the most beautiful RPG book ever published, but we're giving it a go. The promo blurbs and barcode and all that will be on a jacket that fits vertically on just the back cover.

As for the contents... 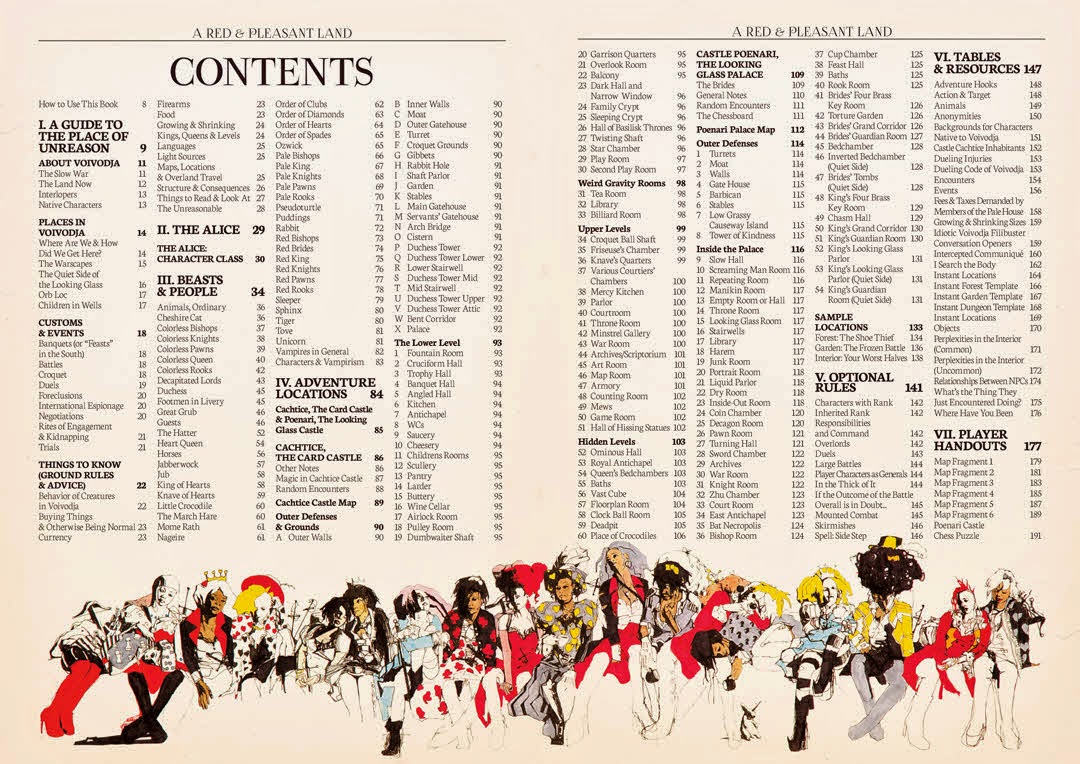 You might need to click to expand that view. The book includes over 70 illustrations by my quick count, plus close to two dozen maps and map details.

(Design and layout guy Jez Gordon should get mentioned here, he's the one that put in all the hours to make everything come together on the page.)

A Red & Pleasant Land is a setting that includes tons of ready-to-go adventure material.

"Officially" the adventure takes place in Voivodja, a southest-Europe equivalent in the world of Vornheim. But if you use another campaign world, it's no problem. Being Alice in Wonderland-inspired, there are looking glass-style ways of popping in and out of this realm.

And even if you're not wanting to run adventures in the Place of Unreason, no problem, you can still use the hell out of this book, because as it says, "The creatures and ideas in this book, like those in the real world, are portable. Feel free to have your players encounter them anywhere, just as a Cold War spy might find a Russian in any hotel room." 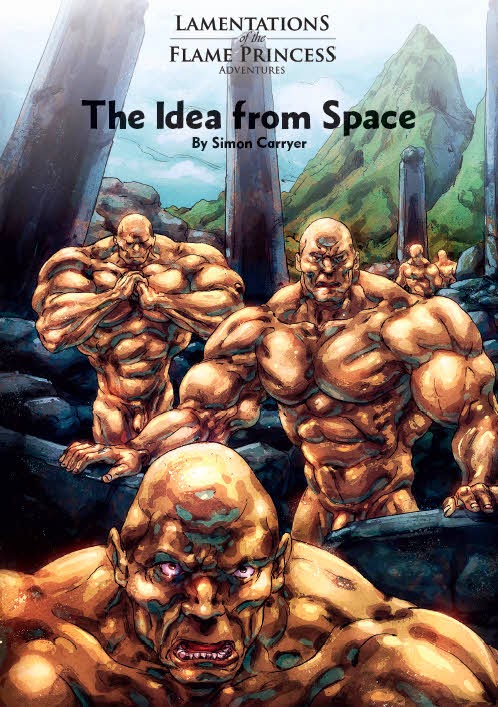 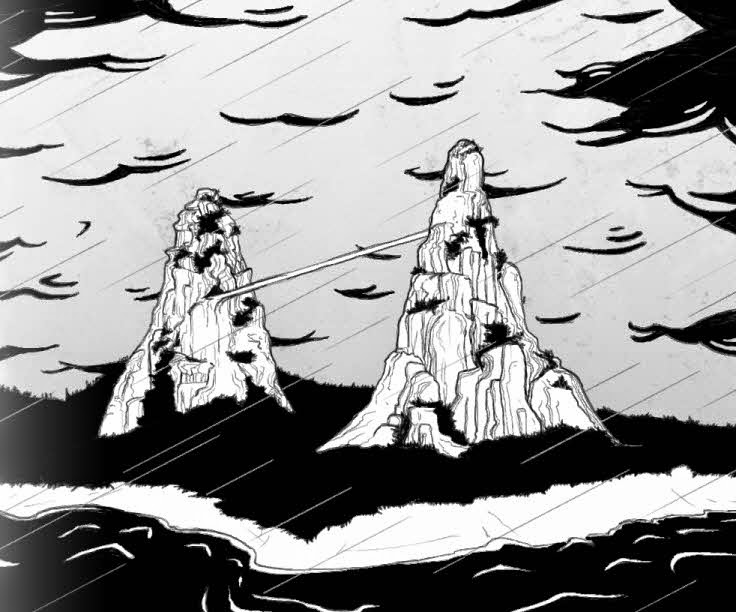 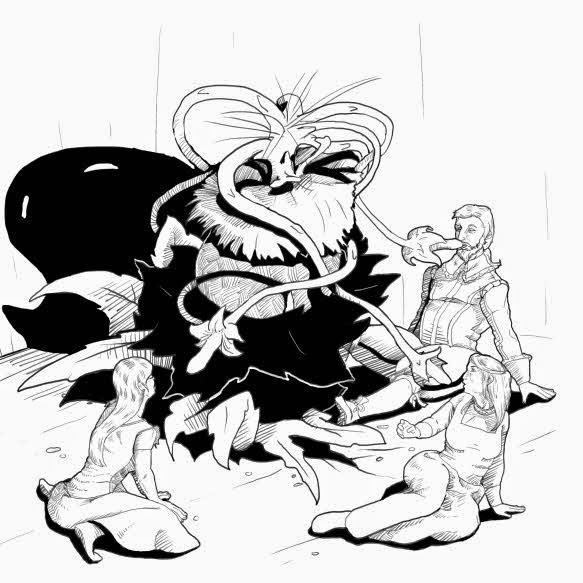 (comments can be left here)
Posted by JimLotFP at 3:00 PM

New Books at the Printer, Out in October!

We've got a few books at the printer now:


They'll be out in October. Save your pennies.
Posted by JimLotFP at 11:21 AM 1 comment: