Surely there's still 14 Refs out there that want a shiny set of revised hardcovers for their group? Or 5 that want that Aino art in it?

Monolith and God that Crawls are coming along. Monolith is in layout but has some extra space in it. I polled the comments section over at the crowdfunding page to see what people wanted me to do with it... and a good number said to put more charts etc. in the empty space. Problem with that is there's only one part of the adventure where it would make real sense to do that, right in the middle, which would basically mean the entire layout gets thrown out the window and would need to be started from scratch. Putting charts in the back that relate to something in the middle just seems rather patchwork and putting unrelated content in there is right out - the Monolith is a tight concept and I don't want to kill the atmosphere with unrelated stuff in the book. So the choices are to get some art to fill in the gaps or have a few blank pages at the end.

The Monolith has gotten such a "wha? huh?" reaction from people when I've run it for them I think I'm going to go for the added artwork. It'll help communicate some of the ideas I think, giving strong visuals instead of the previously intended text-only approach. Not to mention making the book look really alien and awesome. Alfrey's hard-friggin-core.

The God that Crawls will hopefully get a final test run through next week (watch for announcements for the Google + game!) and then that's off to editing and layout.

I'm currently making prelim editing notes on two adventures, Zzarchov Kowolski's Scenic Dunnsmouth and The Colony by James Carpio. I won't be daft enough to actually estimate release dates for them, but I can tell you both feature innovative adventure formats. They are not static locations.

(I won't be crowdfunding these because there's no question of doing them or not...)

In July I will be doing a series of 16 crowdfunding campaigns at the same time. It will be for a series of adventures, but with a different lineup than the current campaign, and in a much different format to correct some of the issues people have noted. If you want to just go for one or a few adventures you can. If you want to go for all of them (and get a significant discount), you can. And Gardening Society members will have even bigger discounts available to them. The lineup so far for these adventures:

More names, and more info on what these names will do with their adventures, in the weeks to come.
Posted by JimLotFP at 11:37 PM 9 comments:

RPGs, a board-game, a history of LARPs and crowdsourced funding vie for hobby-gaming's most eclectic and exclusive trophy

The committee of the Diana Jones Award has announced the shortlist for its 2012 award. The list contains five candidates that in the opinion of the committee exemplify the very best that hobby-gaming produced in 2011. In alphabetical order, they are:

The winner of the 2011 Award will be announced on Wednesday 15th August, at the annual Diana Jones Award and Freelancer Party in Indianapolis, the unofficial start of the Gen Con Indy convention.

ABOUT THE AWARD
The Diana Jones Award for Excellence in Gaming was founded and first awarded in 2001. It is presented annually to the person, product, company, event or any other thing that has, in the opinion of its mostly anonymous committee of games industry luminaries, best demonstrated the quality of ‘excellence’ in the world of hobby-gaming in the previous year. The winner of the Award receives the Diana Jones trophy.

The short-list and eventual winner are chosen by the Diana Jones Committee, a mostly anonymous group of games-industry alumni and illuminati, known to include designers, publishers, cartoonists, and those content to rest on their laurels.

Past winners include industry figures such as Peter Adkison and Jordan Weisman, the role-playing games Nobilis, Sorcerer, and My Life with Master, the board-games Dominion and Ticket to Ride, the website BoardGameGeek; and the charity fundraising work of Irish games conventions. Last year’s winner was Fiasco by Jason Morningstar.

This is the twelfth year of the Award.

More information is available at www.dianajonesaward.org or at the Award’s Wikipedia page at http://en.wikipedia.org/wiki/Diana_Jones_Award.

CONTACT
For more information or an invitation to the announcement of the 2012 Diana Jones Award you can contact a representative of the DJA committee: committee@dianajonesaward.org
Posted by JimLotFP at 3:45 PM 2 comments:

Yeah, these widgets seem to be good at letting you know there's a crowdfunding campaign going on and not very good at being up to date.

Anyway, we're over $11,000 so if the Hite goal isn't reached, then I'll do the Rules and Magic books as two separate hardcovers, each with new Cynthia Sheppard covers.

If we hit $13,500, the Rules & Magic will be one hardcover (with a new Sheppard cover) but I'll go ahead and make up the difference to get the Kenneth Hite adventure done.

Or some combination of the above.

It's possible, people. I'm willing but lack funds to just say "DO ALL THE THINGS!" If you like the idea of a Hite adventure for LotFP, now would be a nice time to show it.
Posted by JimLotFP at 6:05 PM 1 comment:

Someone's Gone and Interviewed Me Again

And that interview is.... HERE!
Posted by JimLotFP at 2:41 PM No comments:

What is "The Weird" anyway?

A couple weeks ago on BFYTW I talked about The Weird:

But yesterday over on Weird Fiction Review there appeared this flowchart by Stephen Graham Jones (click to make smaller): 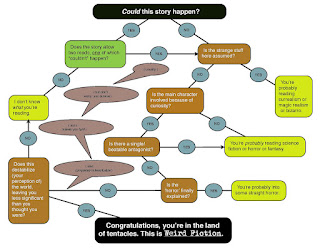 Not that I'm one to appeal to authority or anything, but at the very least it appears I'm not alone in thinking that The Weird is more of a narrow category - and perhaps one that gets narrower all the time with the increasing categorization of everything - than a big umbrella.

Anyway, the two questions in that flowchart that I find most interesting are "Is the strange stuff here assumed?" and "Is the main character involved because of curiosity?"

Even though I obviously haven't based anything I do off of a one-day-old flowchart, this sort of thing does drive some of the ideas from Weird Fantasy Role-Playing (removing certain spells, pressing the power level downwards in general) and definitely my newer work (removing demi-humans, devoting space to historical gaming type material, using the real world as adventure setting).

(Some of the criticism of the game - "Tolkienisms don't belong! - are quite right, but one goal has always been to try to make the game usable to those who don't necessarily share whatever interest I have at any particular moment. Start broader, narrow it down in supplements and adventures.)

"Is the main character involved because of curiosity?"Funny that a frequent criticism of my adventures is that there's no strong plot hooks and I get emails from Refs telling me their players sniffed around the beginnings and then decided "Oh hell no" and walked away. I've always thought that was cool, but I'm also told I'm crazy for thinking so.

"Does this destabilize (your perception of) the world, making you feel less significant than you thought you were?" This is an odd question because I can't imagine feeling less significant in a grand scheme. Life's barely worth tolerating as it is, which is why I spend my life on what is basically nonsense instead of taking the world seriously and participating in it as if I believe in it. Because nothing that matters to me really does matter at all and the only really important question is "How much does it hurt to end?" because that end is the only certainty in life. Sure, afterwards it won't matter (sort of like "How did it feel to be born?" isn't very important now) but I won't be thinking of that when actually going through it, right?

There is a quote used in the promotion of Michel Houellebecq's H.P. Lovecraft: Against the World, Against Life (which is on its way to me now): "Those who love life do not read. Nor do they go to the movies, actually. No matter what might be said, access to the artistic universe is more or less entirely the preserve of those who are a little fed up with the world."

So how can any tentacular fiction compete with reality in demonstrating the insignificance of everything?
Posted by JimLotFP at 12:58 PM 10 comments: The other pic bought by the Monolith/God that Crawls stretch goal. The color page will go between the adventure, with the first side being Rainville's pic that is now this blog's header image, and this Longmore piece here being the other side... matching the fact that Rainville is handling all the God that Crawls stuff and Longmore's doing all the rules supplement stuff.

This is getting a lot bigger than I thought it would when I started the fund drive. I think the pledgers are going to come out ahead... yay!
Posted by JimLotFP at 10:01 PM 6 comments:

Slightly damaged copies of the LotFP Grindhouse set (12 of those) and Carcosa (5) are on sale at over 33% off. Just box/cover scratching or indentations, enough that I don't feel comfortable selling them at full price, but no real structural defects.

So go get them here already if you're interested.
Posted by JimLotFP at 12:40 PM No comments: