Remember that May crowdfunding thing? For the LotFP Rules and Magic hardcover, and, as it turned out, a Kenneth Hite adventure?

Well the hardcover is in layout.

And it's time to give some details about Hite's adventure, Valley of the Lost Shell. Some quotes (from the not-yet-proofed text, mind) to give you an idea of what you're in for:

"The Valley of the Lost Shell is a classic 'exploration' adventure, set in a wet, poisoned sandbox. While the Cylinder is the focus of outside magic-seekers, and makes a convenient 'center of the labyrinth' for goal-directed players, the Qelong Valley is a setting first and foremost."

"Wherever they come from, story elements, once introduced, become part of a narrative in the players’ minds; Referees and players will find themselves almost unconsciously weaving further encounters into the ongoing story. A picaresque adventure – a series of dangers and incidents on the way to somewhere – is the likely result. This kind of adventure maps to general expectations of fantasy quest drama as well as to war stories like Valhalla Rising, Apocalypse Now, and The Good, the Bad, and the Ugly (especially the “war over the bridge” sequence), all of which were among my models for this adventure’s design.

They were also among my models for the general “feel” of the adventure. I see the Qelong Valley as a land of steam, smoke, mist, fog – high grasses and low mangroves, like the Dead Marshes or Beowulf’s fen country. All of this grows not in a placid pastoral Olden Tyme, or even a gently corroded Dark Age, but in the path – or technically on the sidelines -- of a great and incomprehensible war. Houses and farms are burned, villagers gaunt and feral. Dogs whine over the carcasses of their masters, then tear out the intestines to feed themselves. Men kill each other for a handful of rice, or for a woman who can be beaten into cooking it. All around, sorcerous echoes and explosions ripple the skies, but as a constant drumbeat of vile thunder, not as anything aimed at anyone in the same country. The Qelong Valley has been poisoned by accident and forgotten by its killers. Only the scavengers remain, and the worms that grow in the corpse."

"If your campaign takes place on Earth or a close analogue, Sajavedra maps generally to Cambodia; the Qelong River valley specifically to the portion south and west of the Cardamom and Elephant Ranges."

Magical fallout, the elephant lich, the hundred-mile-long naga, the Lotus Monks, the insect-possessed myrmidons, and so much more... different than anything LotFP has done so far, that's for sure.

(...and it might be rushing things a bit to get this and the hardcover to print as originally scheduled in October, especially since this adventure needs some actual play time and the hardcover is going to be a pain to do right. Looking at early November to press so we may still be mailing out by the end of that month, plenty of time for you backers to get your packages by Christmas!

Oh, and I hope to have one or maybe two more adventures going to press with this stuff. Have your wallet ready. We've only begun to get Weird.)
Posted by JimLotFP at 11:30 PM 7 comments:

Vornheim Almost Out of Stock

I have less than two dozen Vornheims in stock here at LotFP HQ.

Because there are still hundreds of copies available through distribution in the US, I'm not reprinting any time soon. (also, for that same reason, North Americans can just as easily mailorder from a place in their home country as from me).

However, you EU people that have been thinking about getting a copy probably shouldn't wait much longer because it might be a bit more of a pain in the ass for you to get a copy before too long.
Posted by JimLotFP at 3:33 PM No comments:

Everyone who signed up for the God that Crawls IndieGoGo or ordered in the past 48 hours, your books are in the mail.
A nice increase from last month's Monolith shipment!
Weird Fantasy rages on!

(The hardcover is in layout, I have a ton of stuff in the works, plus there's Hite and Brockie and Green and Rients and Baker and Zzarchov's stuff to come, all penciled in for THIS YEAR. Cross them fingers!)
Posted by JimLotFP at 8:18 PM 2 comments:

(If you were a Monolith/God that Crawls IndieGoGo contributor, you should have gotten an email from me with the title "THE GOD THAT CRAWLS Link." If you did not, contact me before ordering anything from the store!)

Also, all non-LotFP items in the store are just 5€ each (4€ if you a Gardening Society member). That's a 75% discount in some cases. Get them out of my house! I need space for all the new stuff coming in this year!

A bit of bad focus and lighting (each picture is from the same spot on the same table to give you an idea) but this is the physical format of The God that Crawls: 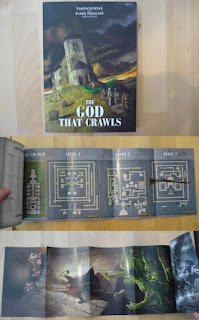 Email ThisBlogThis!Share to TwitterShare to FacebookShare to Pinterest
Labels: The God that Crawls, The Magnificent Joop van Ooms

Cradle of Rabies
Dreams in the Lich House
Grognardia
How to Succeed in RPGs or Die Trying
Obskures (German)
Save vs. Total Party Kill
Ten Foot Pole
Posted by JimLotFP at 9:26 AM No comments:

The God that Crawls Reviews

So the print GDF5s that went out with Monolith have a bad layout goof on page 2.

(the PDFs for sale do not have this error; if you were sent the early errorfied PDF from before they went on sale to the non-contributors, let me know)

To make up for this, all you supporters who got the physical copies of GDF5 with Monolith will get a make-up thingy in your God that Crawls shipment: A full color gloss-laminated A6-sized card with the "Natural 20s" chart on one side, "Natural 1s" on the other.

Still looking like Tuesday for receiving The God that Crawls, and The Magnificent Joop van Ooms and its accompanying poster are here ready to go on sale alongside it.

The God That Crawls is delivered from the printer Sept 18!

Or so they tell me, sometimes they're a day off.

So get ready, everyone... this time it's a more standard dungeon adventure but it's not any more comfortable a ride than Monolith...
Posted by JimLotFP at 4:44 PM No comments:

More sales this year than the past two years combined... and 80% of this year's Ropecon's take. Not bad.

6 Death Love Dooms remain. I printed 225 about six weeks ago, and thought I was printing the unsellable. Not bad.

The God that Crawls should be back from the printer within 2 weeks, and The Magnificent Joop van Ooms (and the accompanying poster of the cover art) will go on sale when the God goes live.

Those that pledged for the God will get the opportunity to order Joop with no shipping costs, same as the Monolith/DLD arrangement.

When those go live, I will also be holding a sale on the non-LotFP OSR products in the store, because I'm finally getting my crap together to make another big order from the US.
Posted by JimLotFP at 9:05 PM No comments:

Tracon 7 - This Weekend in Tampere! BE THERE!

LotFP will be at TRACON!

The new release is The Magnificent Joop van Ooms, and I also have a poster I'm selling with it. The regular price for each is 7€, but at Tracon you can get them both for 11€.

I'll also have Monolith and Death Love Doom (all remaining copies are coming with me, so I've taken it off the LotFP store for now), plus all the older releases like the Grindhouse box, Vornheim, Carcosa, and Isle of the Unknown.

I'm also clearing some stuff out in preparation for a new overseas pallet I have planned, so I'll also have with me non-LotFP adventure modules with the special price of 5€ each - that's 50%+ off a lot of these things.

I'll see the Finnish gamers tomorrow and Sunday, and the rest of you I'll talk to again on Monday!
Posted by JimLotFP at 3:08 PM No comments:

The Magnificent Joop van Ooms off to the Printer! 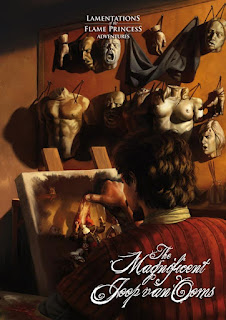 It's another "limited edition to debut at a convention" thing. (One thing I can say in favor of digital POD vs offset press is quick turnaround time!)

Those at Tracon in Tampere this weekend can get it hot off the presses, and the rest of you can get it once The God that Crawls goes on sale.

Oh, there will be posters too.
Posted by JimLotFP at 3:39 PM 3 comments: