OK, I'm home and here are the results from the "Pay What You Want" experiment:

Here are the changes from the 2012 to 2013 LotFP appearances at the UK Games Expo. Results might be a bit skewed because they changed venues this year and everyone I talked to, management of the convention included, reported increased sales and traffic:

Absolutely nobody gave ridiculous low payments for stuff until the last hours of the convention when I was using the "Come on, don't make me lug all this stuff back to Finland!" line at passersby. So thanks everyone. :D

And big thanks to Dominic McDowall of Cubicle 7 for trading some Doctor Who RPG stuff for some LotFP stuff even though those Who books are expensive and I'd already sold out of all my major items. Made all the flights home go much quicker.

Those human-shaped video screens in the Birmingham airport are creepy.

Next convention for LotFP is Ropecon July 26-28 in Espoo, and I'll be back in England for Dragonmeet on December 7 (my birthday!).

(you can comment here)
Posted by JimLotFP at 3:09 AM 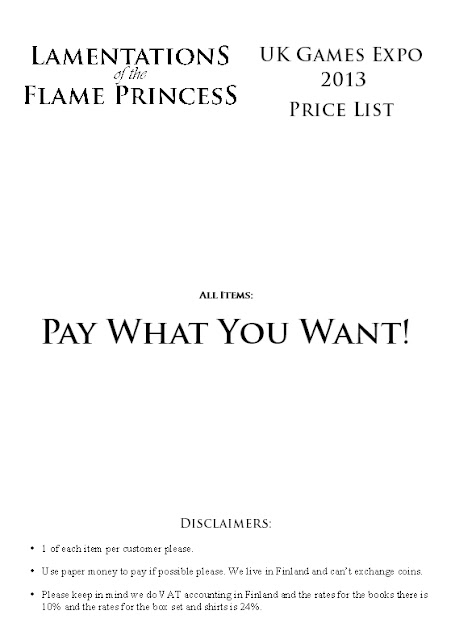 (comments can be left here)
Posted by JimLotFP at 2:17 PM

Anarchy in the UK! Plus Interviews!

I will have a table at the UK Games Expo in Birmingham this weekend. Stop by, say hi, spend money.

Over the weekend I did some online media appearance stuff.

I was on a "Making Games Magical" panel with Julia Ellingboe (Steal Away Jordan) and Kyle Simons (Magicians); you can watch that video here.

I was interviewed by Pete Figtree about the LotFP Free RPG Day adventure. You can watch that video here.
Posted by JimLotFP at 2:45 PM No comments:

I'm off to Sweden for a few days, so until 11:59pm Sunday Finnish time, you can get 25% off of any 10€+ order (pre-tax, pre-shipping) in the LotFP store by using the coupon code SVERIGE.

Just to let you know that the Grindhouse Edition is inching closer to selling out (down to around 10% of it's original print run) and we've just got a couple dozen here. (The next printing's PDFs will be given free to everyone who has the current Grindhouse PDFs.)

This next printing will consist of a hardcover Rules & Magic book and a hardcover Referee book, prices not set in stone but it's looking like 19€ and 27€ (about $25 and $35). The new R&M book will just be a correction/revision of the current Grindhouse Edition, plus gunpowder rules in the appendix. The new Ref book will be an extensive rewriting with tons of new tools and things like that. The new R&M book is almost ready for press, the Ref book will be a couple months down the road at least.

So there's your information to help decide if you want to get the current Grindhouse Edition with this discount or not.
Posted by JimLotFP at 3:06 PM 4 comments:

Domains at War: You Want Gunpowder?


So I was talking to Tavis today about that ACKS Domains at War Kickstarter that's going on. "Does it work with low-magic settings?" Because wizards don't join armies fireballing people in LotFP, you know? I try to buy gaming stuff that I have a decent chance of using.

I was told they playtested historical battles. Cool.

Would gunpowder rules/units be included? (Because the forthcoming new LotFP Rules & Magic hardcover will have firearms rules in it, as my home campaign has for a long time.)

No, it doesn't presently have them included. But because I can't shut up, it might happen if you make it happen.

Use the link from that banner there to pledge to the Kickstarter. If pledges linked from this blog reach $4,250, there will be a PDF supplement for Domains at War covering  gunpowder weapons. But you have to leave a comment on the Kickstarter saying that LotFP sent you; the referral system isn't working perfectly for pledges made from the blog here so that's how Autarch is going to track which dollars come from here.

$7,500 gets the gunpowder rules included in the Domains at War books.

So if you haven't gotten the ACKS game yet, or their Players Companion, now is the time to do it as you can get them as add-ons to this, boosting the $ amount. (I just gave a $120 head start on this.)

No word on what happens if you've already put money down and leave a comment now saying "I want gunpowder rules!" Try it. What else is LotFP other than a harbinger of chaos?

Geoffrey McKinney's Dungeon of the Unknown Available in PDF!

Up on the DriveThru sites! 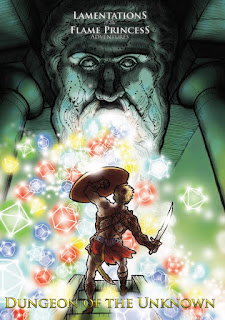 (if you backed Better Than Any Man and didn't get the download link, let me know)
Posted by JimLotFP at 2:43 PM 1 comment: