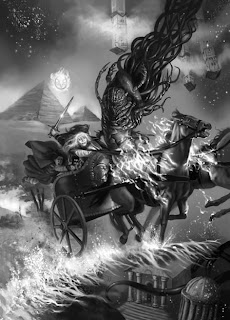 Writing is complete for the next mini-module, The Magnificent Joop van Ooms (about an NPC and his lair and his works and plot hooks to work him into a campaign). It's up to everyone else to get it together while I'm gone and hopefully that goes to press September 3 so it's ready for Tracon. It will go on sale to the general public with God that Crawls, with the same arrangement as Monolith/DLD. There will also be an A1-size poster (or perhaps a poster flag if that company gets back to me...) of the cover art (by Rainville, and the prelims are looking fan-fucking-tastic) available.
Posted by JimLotFP at 10:37 AM No comments:

"(If you haven't used IRC before, the easiest way to get there is probably via www.magicstar.net, clicking on "CHAT NOW" and typing "/join #rpgnet".)"

(see their full schedule of RPG author Q&As here; of note is John Berry of Hulks & Horrors in the 7pm Eastern slot tonight)

(that channel is no longer officially connected to rpg.net so don't be afraid! :D)
Posted by JimLotFP at 3:08 PM No comments:

Everyone who signed up for the Monolith IndieGoGo or ordered in the past 24 hours, your books are in the mail.

It's been a busy couple days... forgive me if those of you due tracking numbers don't get them until tomorrow. I need a breather.

I'm glad I finally have a couple of adventures out there. It's been two years since I've had my own totally new stuff out there. I finally have definite things to point to and say "This is what I mean by Weird Fantasy." An identity that's different than the other games out there using the same base mechanics and the final word in the argument about whether these games can really do things that don't feel like they're 1980. There are no limits, creatively or commercially.

Sold 79 Death Love Dooms the first 24 hours they were on general sale (in addition to the 25 sold at Ropecon so less than half of the print run remains), not bad for an adventure that's basically had no info about it released beyond "it's icky!"

Monolith is the most-played adventure I've released and has been in the works for over a year, and I think it's the best and most distinctive thing I've done to date. Really went all-out to make sure the presentation was absolutely first class.

You guys give these things the word of mouth they deserve... I've got loads to do. I want ten more things out by the end of this year (God, small adventure for Tracon, small adventure for Dragonmeet, Hite's adventure, the hardcover, the 4 adventures that got funded, Zzarchov's, oh yeah plus the 2 exclusives from the adventure campaign and the new non-exclusive... that's more than ten).

The Monolith from beyond Space and Time Reviews!

Just Heard from the Printer

Monolith will be delivered early next week. I'll have it and Death Love Doom on sale the next day in print and PDF.
Posted by JimLotFP at 5:15 PM 3 comments:

Posted by JimLotFP at 9:27 PM No comments:

Recap and Analysis: The Adventure Campaigns

("Thank fuck" say most of you who have been bombarded with updates. I do have two new modules that should be in stock and ready to sell next week, so take that breath of air between blitzes while you can.)

To the people who contributed to Vincent's project, and for the higher levels of Brockie's, give us a few days to ready the procedures to get your PDFs or shirts/posters/tickets to you. Things have been nuts here.

To those two people in for the Collectors hardcover option: I'll take care of you. Give me some time to think of how, but "ha ha, fuck you, you paid $450/$500 for 4 adventures!" is not how this is going to be handled.

How Are You Feeling, Jim?

And the authors themselves can be thanked for that. Rients funded without any gimmicks, but Baker, Green, and Brockie did things that made their projects stand out and here we are. (Cook, Kreider, and Steen did as well, but they didn't catch on for whatever reason.)

There was one key assumption to the whole thing:

Each author's fans would follow them to their adventure here.

Or, "The byline is more important than the brand." That assumption led to:

Those fans would sufficiently fund a enough projects to a point where people who wanted a bunch could swoop in with the high-dollar perks to finish them off and get a big bunch at a discount.

... and the more adventures that were involved, the bigger that discount could be. And the bigger the discount, the more people would go for it!

And that's why there were 19 adventures.

Couldn't You Have Gone With Less Adventures?

A smaller number of adventures would not necessarily have been a bigger success. Rients and Baker, the first two to fund, were last-minute replacements. They weren't even supposed to be part of the whole thing! I thought Green would only ever fund as a knock-on effect of a dozen other people funding first.

Basically, my popularity radar is so dysfunctional it's not even funny. (I also thought Isle of the Unknown would be way more popular than the hardcover Carcosa because it was brand new, as another example.) So less adventures up for grabs might have ended up with less appealing writers doing it.

Because honestly, could anyone have predicted Kelvin Green drawing over four times the money Monte Cook did? I can't believe that now. I thought Cook was the shoe-in for "will fund first and fast." I thought I was so fucking brilliant and amazing for getting him on board.

But the paying audience disagreed.

Likewise, I thought Michael Curtis, who has Stonehell and the DUNGEON frickin ALPHABET under his belt, would be the far-and-away OSR leader, especially after Maliszewski and the ACKS crew dropped out. But Rients outdrew him more than 4-1. I'm still trying to figure that one out.

There is the theory that certain people are more likely to get their stuff out there anyway... The thinking: Curtis, for example, always has projects going for publication, so if he has a good idea it'll show up eventually. Rients, on the other hand, hardly ever publishes anything, and not on a  professional level, so this might be Our Only Chance to get it!

I would have thought the opposite: "Oh, Curtis and Cook and the other frequently published writers have their own shit to do, no reason they'd do anything like that'd resemble what they'd do for LotFP. Rients could post whatever he wanted whenever he wanted since he's not got a steady stream of RPG work to do."

So maybe it's a good thing I threw a whole lot at the wall to see what would stick, because I'm generally pretty clueless.

Did the Target Amount Need to Be That High On Each Adventure?

No, it didn't need to be. I could have hardballed negotiations with each and every writer and artist and had adventure goals starting from $3500 in some cases.

But if I was going to kickstart (heh) my business by building a catalog on the backs of these people, I was going to make damn sure they were going to be compensated decently for it. These aren't really even top writing rates, just much-better-than-average in RPG-land (or WOW HOLY SHIT for most in OSR land). Brockie and Green are going to get quite decent piles of cash when they turn their adventures in, and Baker/Sheppard and Rients/Robertson will be splitting quite decent piles of cash. And they all deserve their piles.

I suppose a lot more could have succeeded if I'd negotiated shit rates for the talent. But fuck that. Paying people well makes me feel good (and makes the wife think I'm crazy and never going to be able to afford to buy her that mansion :D).


So What Happens to the Unfunded Projects?

I think, sooner or later, at least a dozen of these things will see the light of day. Not on the original production schedule, and not with the same financial security a funded project would have afforded the creators (and for those that will not be published by LotFP, not half as cool in their presentation - sorry guys)... but I don't think a lot of the authors will leave them alone.

If any of those are released by LotFP down the line, Gardening Society members will get double their usual discount.

Ask in the comments, on the LotFP message board, G+, or wherever. People were watching how this whole thing would do, and I think there were lessons to learn.

I'm glad I did this.

You've done your part. Now it's time to get our noses down and get all our shit done.

LotFP Crowdfunding Will Return in 2013 for the
FUND A HUGE "FREE RPG DAY" PRINT RUN FOR LOTFP
campaign.