Two pics, both by Amos Orion Sterns. The second one is one of the more extreme examples of how far the art goes.

But before that, something a bit safer. This portrays Alice (pre-Tutorial adventure) taking on a couple of elves. I told Amos to look at the Alien designs (as in the Ridley Scott film) to use as inspiration for the elf armor. We get two birds with one stone here: Show Alice being bad-ass, and show the elves in a different way than they're traditionally presented. 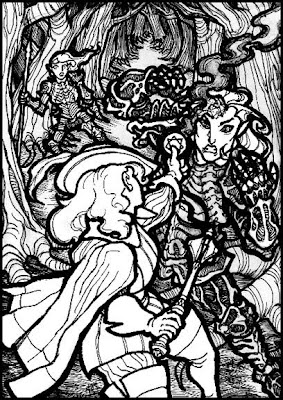 That's a heptacle, not a Star of David. And clerics don't have to use blunt weapons in Weird Fantasy Role-Playing, but why not have a traditional cleric weapon for the cleric?
Last chance to bail before the bad, evil pic that will ruin your childhood. Scroll on... if you dare!

I call this one Cult of the Fertility Goddess: 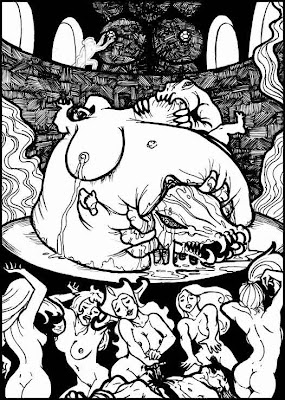 My wife was utterly speechless when she saw it. It was glorious. After she recovered, she then pointed out that, in her professional opinion (she's a midwife that's good enough that she speaks at midwifery conferences out here), this is not an accurate representation of the childbirth process.
(I have a feeling my wife's going to get a few more "You must be a very patient person" comments at cons - someone actually said that to her when we went to Dragonmeet :D)
This isn't the worst the Grindhouse Edition has to offer (there are a couple absolutely humorless pieces that might genuinely disturb), but it's the most over-the-top. That was the point of it.
The core idea for the pic was inspired by Savage Sword of Conan #161 (the sequel story to Valley of Howling Shadows), plus, you know, some adventuring stuff happening up top.
You have my permission to begin frothing at the mouth and telling me that you're outraged that I'm trying to destroy the gaming community by releasing such filth.
Posted by JimLotFP at 4:00 PM