But how do we get from concept to mailing?

The contributors and I first must write our material. Here is a close-up of the monitor at Command Center Theta, featuring one of my contributions to Green Devil Face #2, written in Microsoft Word. It must be said that the writing is the most important part of the whole thing, but it's also the easiest. It's all work from here.

Since I don't have pictures to show you, I'll just say Proofreading is step 1A and layout is step 1B. I hand the manuscript off to Maria to look over for any errors. I do all my layouts in Word, which gives a less than pro, but more than satisfactory result. I wouldn't do fancy layouts even if I had the expertise, and the even spacing of words across a line has never seemed a big deal to me... then again, I've been used to reading oddly laid-out music zines for years. I do have InDesign, but hell if I know how it works.

This is an easy step. I convert my finished Word file to a PDF. I have an ancient version of Adobe (6.something, I think) but it works decently. I use this to print out my booklets.

I have a piece of crap inkjet printer, which as I've learned over the past two days is completely inadequate for my current needs. My miscalculation on the per-page cost of printing is why I need to scoot up the price tonight. I went through 4 cartridges to get the orders ready. But even if it was cheap and efficient, it's slow. Printing out the 38 booklets, that's 540 A4 sides, effectively took all day (especially since I had to manually turn the pages over to do double-sided printing). I swear that thing only prints 2, maybe 3 pages a minute.

I've gone to an office supply store and talked to a salesman and figured out I need a nice cozy laser printer. 92€ plus 60€ for the cartridge, and it claims that it will print 2500 sheets on one cartridge at a speed of 18 pages a minute. I've currently got some limited edition CDs that I never listen to and have only kept because they're limited edition (like a frickin Rhapsody CD with pop-up monsters in the packaging) that are going up for auction in hopes of raising 150€ quickly.

Once I fix my printer issues, this entire process will be much more pleasant. And a lot faster. And much, much cheaper.

While in Stockholm last month, we found this long stapler for 11€. We'd seen prices approaching 100€ for them here in Finland (which makes no sense at all), so we snatched it up. It works great, and is the single most important thing that allows me to make booklets at home. 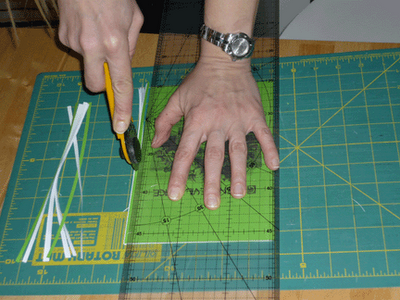 When you fold a pile of paper, the outside edge is uneven. We're using a rotary cutter, which used to be used for Maria's sewing projects, to even out the edges. I also priced proper paper cutters (and at one point bought a cheapy crap-o doesn't-work one), but they approach 200€. Way later for that, as this works just fine.

OK, not crushing. But to make sure these things lay flat, we put them under the Webster's Encyclopedic Unabridged Dictionary of the English Language for awhile. This picture is lame since I only thought to document the process when we had a final few left to make for the current orders. You should have seen the stack under there early in the day!

I keep alternating between saying "I" and "we." I do have to say that Maria is a saint. She was all excited watching me beam over the orders coming in steadily yesterday, and watching me freak out as I discovered the flaws in my plans today and offering to help out with many things.

This one also has a number of sub-steps that I don't have pictures of. When each order comes in, I enter it into my accounting database, and then I address the envelope by hand. I actually don't mind putting your addresses on these envelopes (although I'm sure the postal workers who have to decipher my handwriting wish I'd print the labels). It's putting my return address on all the envelopes that wears me down. At least I don't live in Britain. Have you seen what those addresses look like?

The final step, here at home anyway, is to lick the envelope. I went for the cheapest bulk envelopes I could find, and they are the old fashioned kind requiring some slobber to fasten. Yes, that's right, you get a free DNA sample with every purchase!

Now I know that it sounds like I'm complaining a lot, but I'm only really cranky about the printer. I really like this entire process. It probably would be saner to take it down to the local print shop to do, but I did that for Fantasy Fucking Vietnam, and it sold less than 10 copies. Can you say, "Bad marketing," boys and girls? Sure you can.

But I expect GDF has had its biggest single day, maybe if somebody gives it a glowing review I'll have another bump. And of course when future issues are released, that'll trigger some back issue sales as well. (...but I'll have a faster and cheaper and better printer by then... right, huuto.net bidders?) But no crazy days like today outside of release days. I expect a long tail for these things, but I'm just a lunatic with a blog so only a clever few are going to pounce on the announcement immediately. No reason to have a big box full of stuff in the closet, especially when I'm not yet sure anybody gives a shit. If there's a steady string of releases that have sufficient interest, I'll start having the local Multiprint do all the printing work for me. (I can imagine selling a hundred or two of a release someday, but not enough to warrant a "real" print run, so yeah, Multiprint...)

But GDF is a community project and while I'll adjust prices accordingly to keep myself from losing money, I'm happy to do all this work at no real profit. However, I do have two smaller modules (Death Frost Doom, and, tentatively, For the Glory of St. McIver) I want to have out before a month goes by, both to be released using the method desribed in this blog. You'll forgive me if I want to make a few coins off of those (including that margin I talked about earlier that would make it possible for online vendors to pick it up), both for the effort put into them and for the gaming utility I fully intend them to provide, as well as to raise funds to get Insect Shrine paid off and out the door as well. Once those two modules are out and I have a little catalog to my name, I'll get set up at a pdf vendor or two and give that its proper attention.

I believe in print. Let's see where this goes.
Posted by JimLotFP at 11:24 PM