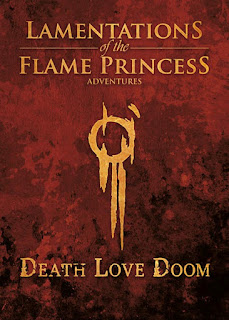 20 pages + detached cover with map, this is the same format as Hammers of the God/Death Frost Doom/Tower of the Stargazer, etc. Written by me.


Limited to 225 print copies (and out of that come the couple of review copies that get sent out, awards panel copies, library copies, etc., so probably 200 available for sale).

It will be released at Ropecon this weekend, then goes on sale to the rest of you the same time as Monolith does early next month. The print version will be an LotFP Store/Convention exclusive. It will not be made available through distribution or Noble Knight or whatever place you might order LotFP stuff from. The PDF version will be available from the regular vendors, but I bet it gets banned from those sites before too long.

It's basically a pseudo-historical haunted house kind of thing. It involves the Duvan'Ku. The adventure went from first concept to print in two weeks (yay team!), including playing it. Was planned to be 8 pages, ended up at 20. Probably rough around the edges, but things I work on for 6+ months still have typos and shit so probably no big difference there.

The first thing done was the art list. I decided to turn the "sick and twisted" up to 11. Then I built an adventure around the imagery. Seriously, if things bother you, skip this one. Crossing the line was first priority. I had artists turn down the job because of the content.

Kelvin Green was the masochist that was willing to take the art job on. Here's what he had to say about the project:

If I'm lucky, you know my work already. If not, google me. The kind of thing I like to draw and the kind of thing James Raggi is known for writing are quite different in tone, so when he asked me to contribute to Death Love Doom, yes I was surprised. Very bad things happen to men, women and children in this adventure, and he wanted me to draw these very bad things? Me, with my cartoony, clean-line style?

Yet that is what I did. It's not the kind of thing I've drawn before, it's not the kind of thing I've ever thought about drawing before, and I may never draw its like again, but all of that is what made me agree; to do James' extreme descriptions justice in my own art style would be a challenge, but we don't grow if we don't challenge ourselves. That seems pretentious, but it's true; I didn't enjoy drawing some of this stuff, but I'm glad I did. I expect there to be a debate about the content, and my part in it, and I welcome that debate. I've learned much about my strengths and limitations as an artist and I've also learned much about my attitudes towards extreme and explicit art, and I will be happy to discuss all of it, because it's an important discussion to have.

Layout/Designer/Cartographer guy Jez Gordon (MR SECRET SANTICORE) had this to say about his involvement (prefaced, at Jez' request, by our opening conversation on the matter):

Raggi: How busy are you the next two weeks? I had the wild hair of an idea... I need a series of illustrations... gore/porntastic.

Gordon: Zombiefistwoman is just over the line for me in terms of yuckfactor, and that's just looking at stuff. actually drawing that level of gross...

Raggi: If I get someone else for the art, would you be willing to do the map and layout?﻿

Gordon: Yeah I think I'm just a little too uncomfortable with this one sorry... But send me through the map details and i'll get started tonight.

And that's how I ended up designing Death Love Doom, but not illustrating it. I was bummed that I had to turn it down, but I kept mulling over how I didn't want to spend hours and hours giving form to these horrid visions. I tend to get a little haunted by horror, it creeps into my eyeballs when I'm falling asleep and likes to party in my brainpan. So I had to say no. And it was the right thing to do... As it was I'd be thinking about some of the stuff that's in Death Love Doom when I wasn't working on it, and just feel... sick. Bits and pieces of it are hardcore. So yeah. It's not for the faint of heart, or weak of stomach, or those who think about the children. Because you really don't want to think about the children. Really. You don't.

I got through the horror by focusing on the historical aspect, and worked to reproduce as accurately as possible the location - a 17th century merchant's house outside of London. I drew heavily on the architecture of Fenton House (big thank you to James Stuart and Duncan Young for the surveillance - Hampstead is just a too far from here to make the day trip) and married that with the needs of the adventure. How far way can a scream be heard? What are the mechanics of 17th century plumbing? The sleeping habits of coachmen? Why I love doing real-world rpgs, you always learn a little bit more...

So would I do it again? Yep, you bet. As horrible as the subject matter is, it's make believe. No one was harmed in the making of this fantasy, and the fact that I still feel off thinking about some of what's in Death Love Doom is an indicator that this level of horror can't be normalised. It was, and remains, sickening.

And so it should.

... or maybe we'll get lucky and people will leave it alone if they don't appreciate this sort of thing and we won't have to play Outrage Theater again. Or maybe we're making a mountain out of a molehill and we're not actually hitting that unpredictable squicky outrage button at all. One can hope. Well, maybe you can. I'm not too hopeful. No matter how plainly I warn or how loud I yell "SICK SHIT IS HERE" somebody's going to buy it and then get very angry because there's sick shit there.

But, you know, fair warning: THERE IS SICK SHIT HERE. As part of what turned out to be a pretty good and effective adventure.
Posted by JimLotFP at 10:55 AM