I Play(ed)... and Rules/Dungeon Design Commentary!

This is from Friday's game.

You would think I would learn to have the picture taken at the beginning of the session when everyone's fresh (we started this night at 6pm), and not just when people are starting to leave (we played 7 hours) and we look like we're about to drop over. We don't look this zombified normally. 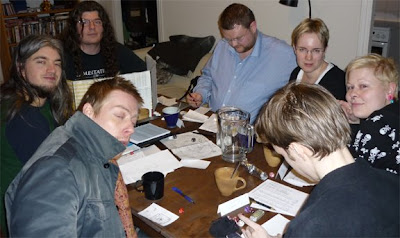 The two new players from last week returned this week, which was good.

Lots of weird happenings this time around. Some non-cooperation (and grabbing treasure for oneself), and realizing that the Purple Lotus gives visions of what happened centuries ago in the location it's huffed, so lots of hallucinogenic drug use happening in this session. Interesting group thus far, and some of these actions would make a bit more sense if there was more of a fluid session-to-session player group (which I hope to achieve since the Olden Domain campaign is supposed to be a West Marches style game), so we'll see how this plays out.

My girlfriend tagged along this time, but didn't play... just sat on the couch behind me there and watched us for seven hours. That sounds insane, but she enjoys watching people and figuring out how they operate as a group. I got a full report after the session and learned things I just don't pay attention to when I'm figuring out locations and who's where and if the monster hears them or... or... or...

I also got an interesting conversation about the nature of the game itself, which I'll address in its own post later on.

A couple things about the actual playing became apparent during this session.

One, the OD&D/Chainmail combat seems to favor numbers over a single powerful creature. After figuring out that the AD&D Monster Manual was more in line with OD&D/Holmes (armor classes, alignments, spell abilities, etc) than the rest of AD&D proper, I decided to use it as a resource for this game.

Now, I'm using original booklets and Chainmail combat, so no variable damage (although I have small creatures, daggers, and hand axes do 1/2d6 instead of 1d6), no variable hit dice, and monsters get one attack per round standard. With d6 standard (with only monsters like ogres, giants, and efreet getting bonus damage) I decided not to give everything bonus damage. d6 standard unless it's very unusual circumstances. I also give full hit points at first level (but NPC hirelings are 0 level get 4-6hp... figure the PCs wouldn't hire complete wimp no-hopers, right?) and rule that 0 hp means unconscious, negative hp equals death. So even a heavy-hitting monster can't kill any PC with one shot. Just knock him unconscious (and not even that for the fighting men or dwarves or those with a constitution bonus). Just my way of not making the game a wholesale slaughter.

(But there was one PC death and two hireling deaths during this session. There very nearly was a lot more PC deaths, but for some lucky rolls made at the table.)

This does mean that even normal men ganging up on the largest creature (if it doesn't have a special attack) is going to win if they're willing to take a few casualties. And I like that. I never liked having classes NPCs in every village and I wondered then how any village could possibly survive against even a low hit die creature in the wild. Every farmer would be eaten by an ankheg, etc. But this "gang up" thing makes sense. OD&D has an "angry villagers" rule, but I think the rules as I'm interpreting them create their own Angry Mob option. Getting a few dozen villagers with pitchforks and torches and heading up to talk to the evil wizard and his monstrous creation might not be an insane thing to do after all...

For the Creature Generator plug, I also created an squid-like creature with four mouths with a special attack that involved the four mouths engaging in harmony singing to sonically stun anyone who hears it... and while it bites, three mouths is enough to maintain the singing. I put this in the castle's music room of course.

The lotus zombies (zombies with the lotus plant so intertwined in its corpse that whenever it's hit, a cloud of purple lotus drug sprays the attacker, and the same but with a save bonus when the zombie hits) were another creation inspired by the Creature Generator but with the exact details filled in by me.

The other thing I noticed... since this entire "Sunken City" environment is supposed to be a beginner's area, even though I put nasty monsters in places (the monster that made me look at the above situation was a roper, which 5 1st level PCs + 3 0 level hirelings were able to defeat with only 1 or 2 - I forget - hireling casualty/ies), I'm not yet really presenting wandering monsters that much, and when they do appear, they are directly from a keyed area.

So the players search everywhere, everything, full sweep, every single nook and cranny. There really isn't so much organization or urgency to their exploration. "This room. That room. Then the other one." The castle has a total of about two dozen towers which are more or less identical. And they search every one, each level, one by one.

It gets a bit tedious, but it's my dungeon design that's to blame. I follow the general guidelines of having 1/3rd of the locations contain a monster and 1/3rd containing a treasure. Not always the same locations, either. And in this particular case, with what the castle is, and my background explanation for why the stuff is there, the treasure isn't spectacular or spectacularly hidden in most cases. Add that factor to the lack of wandering monsters, of course they're going to sweep every inch of the place.

Future locations will encourage more keep moving and less we set up shop on this level and clear the mother out. But in ways that the players can take advantage of instead of merely being victimized by. Options and empowerment will be the order of the day, but maybe a bit snappier. ;)

Another thing I noticed is that I'm playing it fast and loose with the locations (abandoned/haunted castle), but the rooms are "real" places... barracks, kitchen, bedrooms, etc. But I don't have the places fully detailed down to every last broken cabinet and such. I just give rough descriptions.

But I also don't have a thief class, and I'm trying to encourage "role-played" exploration. Not just "I search the room," but, "I check that thing." Base success and things found on what the players say, not a die roll. But with rough descriptions given to the players, that's not very possible. It isn't so much a problem in dungeon settings, where there isn't so much "real world" baggage. But the remnants of an inhabited, civilized structure? Yeah, it runs into issues.

So there are a couple things to address to make gameplay quicker paced and more immersive that I will be working on.

They did manage to find a pile of treasure though. A lot of them are almost... almost... to level 2. Remember that Holmes suggests 7 to 14 sessions between each level.
Posted by JimLotFP at 12:55 AM

Email ThisBlogThis!Share to TwitterShare to FacebookShare to Pinterest
Labels: I Play, The Olden Domain