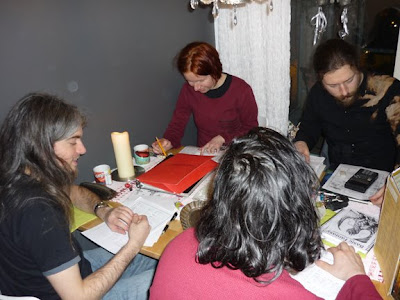 The players study their options! This game runs from 2pm - 8pm (give or take) so we're generally more lively... well, when certain people aren't dreadfully hungover, that is! We had three absent players this time, leaving the remaining four (two thieves, a fighter, and magic-user!) with no healing capabilities (bad since last session ended in the dungeon, trapped, and wounded after having just completed A Big Fight!) and low on pure fighting power!

I'm running them through Pod Caverns of the Sinister Shroom, which I'm going to review after they get through it. I've had some harsh things to say about certain bits before, but I think gaming reviews really aren't valid without some actual play to back them up. How something reads often has little relation to how something plays. I expect these guys to finish up next session (which will make a total of 4 sessions in here). 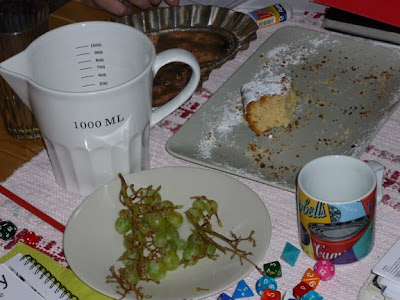 The girlfriend was home, so she baked for us (although I do believe the grapes were Elsa's). If I was smart, I would have taken a picture of the cookies and cake before we ate it, but I was rather concerned with the actual game... and eating! Even when Maria doesn't bake something fabulous, I try to bake fresh bread for everyone. When the game is at my place, I like to make sure everyone has a fair supply of nom-noms! 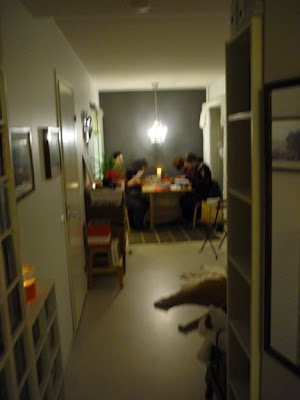 "The hallway continues for 10', and then opens into a 20' x 20' room (you're entering from the left side). In the far left corner, you see a table, around which are huddled four gamers! What do you do?"
Posted by JimLotFP at 1:17 AM