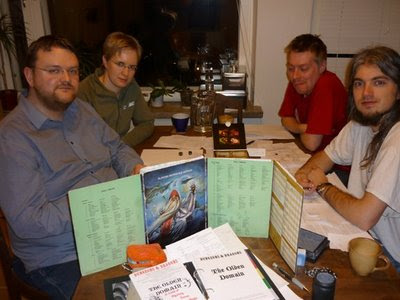 The Olden Domain's involvement so far now: 6 people from 4 different countries (including me; the referee counts!).

Tonight's reinforced lesson was... put the official equipment list online so people can spend their treasure without taking up gametime. Make pre-selected equipment packs so starting players can pick one and be good to go. Character creation is a snap, but sorting out everyone's equipment today took around an hour. Again. That kind of thing shouldn't happen, even if it shows the players are taking that sort of thing seriously. So effort will be made to drastically cut that down in the future.

I was also late to the session because I went to see The Wrestler (and I forgot that the running time of the movie doesn't mean anything when they have 20 minutes of ads and trailers before the movie but after the listed showtime). argh. But it was worth it. The Wrestler is absolutely the best movie ever made involving pro wrestling, and it's so true to life (and all of the wrestling promotions featured in the movie are real, as are most of the wrestlers) that it's heartbreaking... because I don't watch WWE or TNA, when I have money to spend on wrestling, it's on independents, at the level the movie features or smaller. The parts you will think they make up are probably the things closest to how things are. I know people who put themselves through that (but have never been backstage myself, so take that for what it's worth)... The style they chose to shoot the movie gives it a documentary feel, as well as putting you in the ring with the guys and showing that even though wrestling is "fake," they put themselves through hell out there.

It's very uncomfortable viewing, and I don't know if it would be more uncomfortable to people familiar with everything shown in the movie (hell, I've bladed for a class project) or people who don't know anything about wrestling (yes, they really do cut their foreheads open with razor blades to bleed!) and are just going to see a critically acclaimed movie.

I'm really glad my inquiries into getting trained to be a wrestler in 92 and 97 never got far.

I somehow fit a movie review into my RPG blog. Awesome! But it is relevant for our purposes because a theme of the movie is holding on to the past too tightly for too long, so... on topic. Yeah. Sure. :D