And now for something complete different...

Tonight is the second session for The Olden Domain (expect pics in the early morning local time), so this might be a good time to show a bit of a session recap from last time (and the first suggestion of where to go this time, and they did end up deciding to go into the dungeon again) and map one of my players (hi, Corentin!) made from the last session:

I'd say we keep exploring the dungeon, unless people want to attack the gnolls in the tower.

For those who weren't there, the Sunken City is deep down a hole. On a side, there's a tower occupied by gnolls. In the bottom of the hole is a lake near which live some weak and ragged humans who are regularly raided by the gnolls. There's also a castle supposedly haunted in which none of the aforementioned people dare going. And finally, caves make the sides of the hole look a bit like gruyère and must be full full of some nocturnal monsters.

During last expedition, Gnarly, Alex and Altaeioni (me) decided to take the side of the weak humans by killing a party of gnoll raiders. For that reason, those people now consider us as warriors. In the long run, it may be possible to take over the gnoll tower and install the humans in there so that future expeditions would have some advanced outpost where to rest in the Olden Domain. This is the reason why I consider that attacking the tower might be an interesting option.

But if we don't feel like taking over a whole gnoll settlement, the dungeon under the humans' village is my first choice. 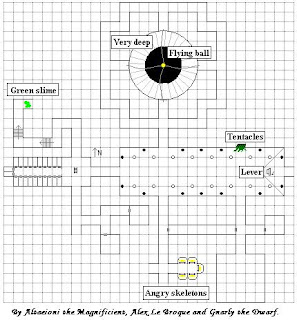 Email ThisBlogThis!Share to TwitterShare to FacebookShare to Pinterest
Labels: The Olden Domain