What the Hell, Frog God?

I try to be easy to get along with these days, especially with my fellow publishers with whom I have a business relationship (in this case a sales outlet for another publisher's goods). There are rants and raves that some people in this scene deserve, but I'd rather sit at the adult table for the time being. And complaining about what other people do with their releases is silly, since I can just show my way with my own releases, right?
But sometimes I see something so dumb I just can't keep my mouth shut.

The good news about Frog God Games is that they continue to pump out material at an impressive rate. Swords & Wizardry is well supported and plenty of their stuff gets a consensus thumbs up, so they're not flooding the market with crap.
I have 10 copies of the S&W version of the Tome of Horrors on their way along with 5 of their other new releases, for you Europeans who want a bit better deal on shipping, by the way.
The bad news is that one of those new releases is the new printing of Matt Finch's The Spire of Iron and Crystal. The module is awesome, and in fact is one of exactly two modules (the other being Maliszewski's Cursed Chateau) from this OSR thing that I tell people that I wished I'd written and/or published myself. I can't say enough about how awesome it is. 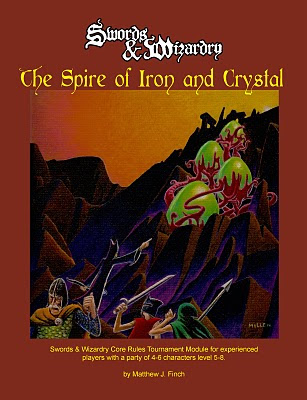 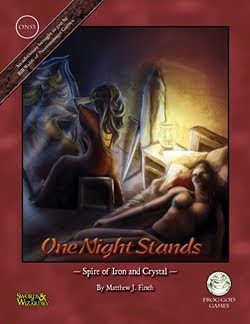 (edit, for clarity, here's a larger image of the One Night Stands cover on another module) 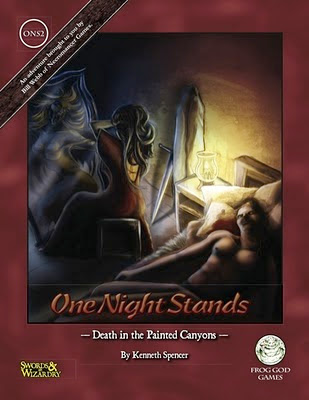 So the adventure doesn't even get its own cover, it gets the embarrassing One Night Stands naughty joke cover that's on the whole series.

Great Mullen art that was directly related to the module substituted for art that doesn't have a damn thing to do with the module it covers.

Is there any excuse?

Hands up if you think a modern day classic has just been downright defaced.

Email ThisBlogThis!Share to TwitterShare to FacebookShare to Pinterest
Labels: That Can't Possibly Be the Real Cover