Interesting conversation about "The Sexualized Male" happening about. Zak opened with the question "What constitutes a sexualized male character?" here.

Trollsmyth has in the past few days explored the topic more here and here.

This kind of thing is interesting and relevant to me because I commission a lot of art, and I want to make sure I'm doing the right things to get the intended responses from people and not fucking the whole thing up.

Early on in the art process for the Grindhouse Edition (five months ago, before the Sex Wars brouhaha), I commissioned a piece specifically to portray an explicitly sexualized male. I used the context that I usually see guys preening with favorable response - a concert. (this also satisfied my want for some "slice of life" art instead of wowawesomeRPGpopcornart, even in the more expensive color pieces)

Here's what came of it. I call this character Blackie Ritchmore. Art by Nicole Cardiff. 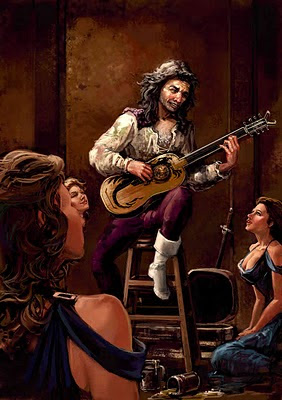 (the original idea would be for the ladies to be suspiciously young, but it's probably for the best that it didn't end up quite like that... I also like making characters and personalities up for pieces like this... note how he's grubby as hell but his boots are absolutely spotless)

The Grindhouse Edition also has full frontal nudity in a few pieces - male and female - but I really, really hope that half of them aren't considered in any way titillating by the reader and I hope people don't think I find such things arousing. But I know how these things go and I look forward to all the accusations that will come.

... and still waiting for the right project is an explicitly homoerotic male concept. It was going to be the cover of the now-scrapped monster book idea (my interpretation of the satyr) but I still may find a place for it yet. There is a bit of intentional homoeroticism (or at least my straight-male impression of it) that made it into the Grindhouse Edition (look at the grappling rules when it's out) but it's nowhere near as blatant as the monster book cover would have been. (not that my motives are pure... squicking out that middle-aged prude conservative grognard stereotype - you know, the ones that theoretically are the chainmail bikini audience to begin with... is the point of the exercise. I bet that will get complaints, but with little exception, I only use nudity and eroticism at all for horrific effect)

Of course I'm still a bit confused about the whole sexualization thing when it comes to portraying women. I can't divorce the "sexualized" definition that people use from things that appeal to me when it comes to these discussions.

It's an Elmore piece from the Companion set in 83/84. As a 10 year old or whatever, of all the various things in TSR art that could have given me those funny feelings, this was the one that I would stare at endlessly in that way. Not the AD&D succubus or the sylph or Aleena or whatever else people commonly bring up. (and in Elfquest, which I also read quite young, for all the sex and other things going on, it was Moonshade that to me was "the cute one")

(my wife bought the fake ears at Spiel and hasn't even taken them out of the damn package. Fuckin' hell, right?) (I just read this out loud to her and she's giving me very funny looks)

So one thing that confuses me a bit, because of my own preferences, is that when people complain about cheesecake art and talk about what they wish were depicted instead, their preferred depictions are more likely to make me look at the piece in the way that they complain that the cheesecake art is intended to be viewed.

For example, the box cover. Turning Luna into a topless snake demon to me killed any sexual appeal she has because it's a monstrous image, whereas the idea of putting Marjut into the Solomon Kane getup was a far more appealing idea for me than the miniskirt/mesh top combos she wears.

So am I good guy for not resorting to contextless cheesecake, whatever the reason behind it? Or am I bad guy for objectifying the Strong Female?

Email ThisBlogThis!Share to TwitterShare to FacebookShare to Pinterest
Labels: Women in Gaming: Threat or Menace?