A Look (Far) Ahead

I'll have a post later on today about the more near-term projects LotFP will be releasing, but just a word about a down-the-line goal.

One thing I am a fan of is a more modern assumed culture for my games. That caused a bit of concern when No Dignity in Death was released and it had printing presses and ladies pictured in 19th century dresses. The cover of Weird Fantasy Role-Playing is specifically planned to be not- medieval, and Tower of the Stargazer certainly isn't your everyday medieval setup.

One thing I am most interested in is moving my focus to making everything about the assumed setting of Weird Fantasy Role-Playing into the late 16th and early 17th centuries. That means guns.

Two things prevent me from including that kind of thing in the Weird Fantasy game proper - it's widely considered to be a genre clash to have guns in a fantasy game. Yeah, 2e had the arquebus and there is Warhammer, but the average fantasy gamer doesn't use them. I don't want Weird Fantasy Role-Playing to be completely divorced from familiar modes. The other thing is, well, it's very easy to use game books as sources for how these things should be, and that's crap. I wanted to research and build a firearm system from scratch from a knowledgeable base, not just do a clone version of what A Mighty Fortress did or whatever. I want to give it a proper amount of time. This isn't just an adventure, it's a whole new way of looking at a setting.

When I was in England I stocked up on a lot of history books about the English Civil War and the Thirty Years War and other books on the time period. I've recently placed a more substantial order of books (about 20) , a good deal specifically about the arms and armies of that time period.

Not to say Weird Fantasy Role-Playing is going to become a historical game. I don't have near the eye for detail to make that work, I'd want things like The Three Musketeers to be just as important a reference as any historical record, and I'd want to mix and match elements of, say, 1450 - 1640 without worrying much about it.

But many people associate that time period with all sorts of derring-do and swashbucklery and incredible advances in art and science, but it was also a time of intense religious bloodshed, colonial exploitation and genocide around the world. It marked the beginning of chattel slavery. It was a brutal, brutal time. Which suits me just fine.

The idea is to come up with a handy set of rules to introduce into my home games and see how they work. Get them to where they're comfortable, come up with a good variety of new spells to accompany a late Renaissance setting, and have a good mass combat system that takes into account the time period. Put a book together with this all-original material and release it as a cross-clone supplement (not LotFP-specific).

Or maybe it'll be a mess and I'll get real tired real quick of PCs trying to be Guy Fawkes as a solution to every problem and I'll scrap the whole idea.

Anyway, the first batch of my new books came in today. 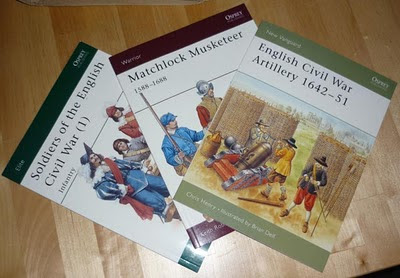