So today I've been dealing with art issues, doing some prelim layouts, and doing research. Multi-tasking on a Friday. Because you care so much. :D

I was reading Handbook to Life in Renaissance Europe today (by Sandra Sider), and something struck me while getting to the chapters about European contact with indigenous people around the globe.

I don't use orcs or ogres or any of that stuff in my games these days (I have used "goblins" as a humanoid catch-all not too long ago, but my campaign is moving more and more to Earth 1600s)... but I'm reading these books and taking notes as to what the "guns (and other Renaissance things)" project would need to contain. But it's going to be a cross-clone supplement, and I do believe most people who follow my stuff go for a "fantasy standard" setting approach... that means orcs, kobolds, goblins, etc.

How to deal with that?

Or I could do something else with the whole humanoid thing.

See, wherever the Europeans went, they acted like the owned the place. Conquered and colonized and made slaves or slaughtered everywhere they could. Where they couldn't, only then did they actually trade. They were dicks. This is old news. But how to twist that to fit a fantasy game?

Remember that whole criticism about humanoid monsters just being stand-ins for ethnic minorities so it's OK to kill and rob them? I do believe that argument, with orcs etc as traditionally presented, is bullshit.

But what if you change the assumptions so they actually are?

What if the entire concept of "orc" and "hobgoblin" or whatever is a cultural construct of the campaign world, and these things aren't a different species at all, or "irredeemably evil" or whatever. What if they are actually human and it's just the PCs' racist cultural viewpoint that views their features as monstrous and treats them as subhuman vermin threats fit only for the sword?
What, you thought it was just coincidence that orcs and humans make half-orcs? Isn't awfully convenient that your Charm Person and Hold Person spells work on these guys just like they do those you recognize as human? Hmmmm?
Horrific, yes. But completely fitting in the mindset of the real-life Renaissance where all sorts of otherwise courageous and wise people thought nothing of slaughtering and enslaving their fellow human beings around the world (while slaughtering each other at home over minor theological differences within the same religion) just because they looked and lived differently than they... 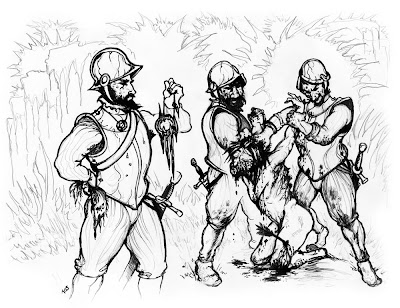 Our heroic countrymen subdue a wicked orc from the southern jungles before it can do evil...

For best effect, reveal the truth to your players just after they finish Keep on the Borderlands.