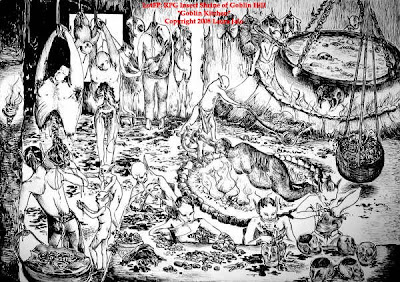 Why? Because there's no reason to use goblin bad guys if human bandits work plot-wise just as well. Bandits wouldn't do this. Creatures that saw humans as just another natural resource would though. And that's a pretty good reason for going after them, yes? And who else is going to be laired in a giant mound originally consecrated to ancient bug gods?

Plus I have this Duvan'Ku thing that I add notes to every so often (a collection of spells, items, and adventures relating to an ancient kingdom of the damned). A couple of examples of what was in there before I ever knew Carcosa had graphic content:

Dangerous Toys
Level: 1st
This spell causes a minor demon to inhabit a very small inanimate object. The demon wakes up, animating the object, when it is touched by a child. At that point the object will attempt to slay any living thing it comes across. The object then has AC Unarmored, MV Human Average, HD 1, #AT 1, D d6.

Storm of Fertility
Level: 9th
This spell impregnates every female of the same race as the caster in a large area. Before casting the spell, the caster must trap an extra-planar being in a containment circle. Casting this spell kills this creature, and this being is the father of the children it spawns. The spell affects an area one mile in diameter for every hit die of the trapped creature, with each female getting a saving throw to avoid its effects. The children will look like the mother’s race, mature at the rate of the mother’s race, but have the temperament, alignment, and abilities of the father.

Book of Faust
By reading this book, a character may make a pact with a devil and increase one ability score to 18 in exchange for one service to be rendered one year from the time of the ability score gain. At the one year mark, an Arch-Devil will appear in person to take that person to hell, and the character can not be raised or resurrected, and a wish to bring the character back will result in a crippled stump of a body, no limbs, blind, and dumb, being spewed forth from the Arch-Devil that had required service.

Chalice of Great Health
If a good creature is ritually sacrificed and its blood immediately collected in this cup, the drinker will be cured of any curses and diseases, magical or mundane.

Gem of Lifeforce Sight
This gem acts as a gem of seeing, but when looking through the gem all living beings will be seen as slowly rotting and dying, and the viewer will be able to tell the how long the creature will naturally live. This insults the soul of the viewed, and any creature that will naturally die (of age or disease) within a month will rise as a wight or wraith to hunt the viewer. Anyone else viewed with the gem that dies within 24 hours will also rise as a wight or wraith and hunt the viewer, feeling the violation contributed to its death.