Looks like this is going to be the next thing to the printer as it's in layout right now.
The art isn't finished but we're going to do the layout and then have the art made for the layout instead of doing the ton of art and then figuring out where it goes. I'll post some art samples soon as things get finalized... we're going for a 3 color interior so some of the art might not just be black and white line art as originally planned. Each of the hexes will have an extra feature in it (we're incorporating Chris Robert's Strange Sights of the Doomed World Carcosa into the work, and most of those are longer than the original hex features), we've added encounter tables, Fungoid Gardens of the Bone Sorcerer will be part of the book, there's an extra little bit about life on Carcosa, the terrain maps will be in full color, and we could have up to 40 total pages of art in this thing (each piece approved by McKinney). Total page count is going to be somewhere between 200 and 400 pages depending on how it's laid out.

There will be no pre-orders. Due to the nature of the cover art being dependent on the physical material to look impressive and not the art itself, plus the fact that I'd like to be sure I get the shipping weight right, this won't go on sale until it comes back from the printer.

There will be full color cloth maps made of for Carcosa, but they're a bit too expensive to manufacture to just give away as freebies. I'll figure this out.

Not sure if I'm doing Carcosa shirts, but if so I'll just order a bunch and then sell them instead of doing shirt pre-orders..

What I'm stumped about at the moment is how to structure the giveaways for Carcosa. I always like to do giveaway contests leading up to a release. What would be appropriate for Carcosa?

And for those that missed it the first time around, here's the tryout piece that got Rich Longmore the Carcosa art job: 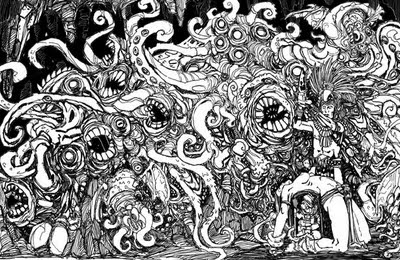