WHY I PUBLISHED... #9: The Staffortonshire Trading Company Works of John Williams 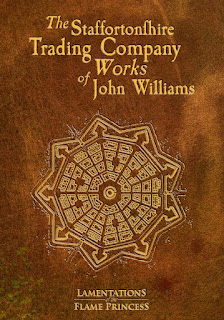 On October 25 we made 10 new releases available from https://www.lotfp.com/store/ ; eight for sale, and two freebies to entice purchase.
Packing and shipping from that initial avalanche of orders is ongoing, but I'm going to take a few minutes every day or two to explain why I decided to publish the items I did, and I will do so in order from what I expected to be the most generally acceptable to what I expect to be the most controversial.
Now coming in at #9... Staffortonshire!
This release has basically been in the can for a number of years... but because it's pretty much just maps, I thought I'd pair it up with another historical supplement to really push the overall concept of historical gaming being part of the LotFP experience along with the weirdness and death metal and Troma flavoring.
But one project with a large advance still hasn't been done, another project that I thought was going to be a showcase event kind of book was canceled by the author last year, and at this point how long do I keep this thing laying around? Time to make the donuts.
Now since we started using the Early Modern historical time period for the backdrop of LotFP in 2012, there has been this tension of people not knowing how to do history "right." If people pick up classic RPG settings like Forgotten Realms or Greyhawk, they feel they have more license to invent or change or even just make mistakes concerning the setting, because it's made up, who cares.
But history? oooooo it's like they're hurting somebody if they screw it up.
Happens to me frequently. I goof shit up all the time, and I have a couple bookcases of expensive university press books concerning the era. (I'd recommend Geoffrey Parker's Global Crisis, Cunningham and Grell's The Four Horsemen of the Apocalypse, and Peter H. Wilson's Europe's Tragedy as good primers for the era... and just from these titles you see one reason I chose this time period for LotFP!)
So I've had the idea to have people do historical sourcebooks for the era, but that's like pulling teeth. "What, no tentacle monsters?"
We've woven the historical setting through many of our releases, but the only one to date that really is hard history is the magnificent No Rest for the Wicked, which really is an emotional grinder worthy of the LotFP name. A few others aren't explicitly supernatural but are still "hyper real" in ways I wouldn't consider them "historically based."
So here you go, a whole 128 pages of maps that can help you present a greater sheen of authenticity if you're embracing the historical setting as the backdrop for all the fantastic nonsense that people seem to prefer from their RPG gaming.
Of course there's the concept, and then there's the production. What should the _book_ look like? This is where the publisher/businessman hat comes into play.
I went with a fancy-ass printed hard cover with foiling, a "wet" varnish (feels so good to just rub it all over!), a couple of bookmark ribbons, and stitch binding, plus a full color print even though for the most part the colors are very muted background texture. Yeah, I could have just done a cheapie b/w softcover and maybe it could sell for half the price (I price using a formula based on actual per-unit cost).
But a few things there...
One, there is evidence that putting a book in a hardcover format makes it sell better than a softcover, simply for the fact that it's hardcover.
Two, because my pricing is based on costs... better production values means a bigger risk... but bigger potential reward if it catches on and sells well. A more expensive book that sells well better enriches the creator (who damn well deserves it doing 128 pages of maps!) as well as keeps my business going and allows me a greater opportunity to take chances on other projects. And if the risk doesn't pay off... well... we did our best shooting for success, which makes a whole lot more sense to me than presenting a project that was produced to mitigate failure.
Three, who doesn't love a well-made, beautiful book? People who want it cheap can (and will) print out the PDF.
#8 in a day or two!
Posted by JimLotFP at 9:04 PM