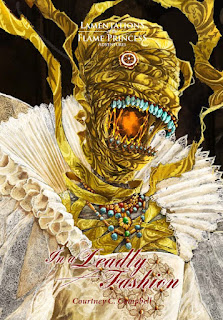 On October 25 we made 10 new releases available from https://www.lotfp.com/store/ ; eight for sale, and two freebies to entice purchase.
Packing and shipping from that initial avalanche of orders is ongoing, but I'm going to take a few minutes every day or two to explain why I decided to publish the items I did, and I will do so in order from what I expected to be the most generally acceptable to what I expect to be the most controversial.
Now coming in at #6... In a Deadly Fashion!
Courtney submitted the first draft of this adventure on November 30, 2015. The final draft, after playtesting, on February 15, 2016. Why did a 48 page adventure take five and a half years to get released? Not going to go too deep into it but tTto scrap that and get a new artist, but then we lost the layout person including editing changes that had been communicated to the layout person but never communicated with me, the new layout person had to recreate the old layout blocks pretty much from scratch but retain the old person's structure because art had already been done to fit the old layout, but then we lost that artist so then a new artist had to come in and of course had to do a fresh editorial review... I hope everyone involved in the delays gets an evening of uncomfortable indigestion. (I've already done my evening.) But basically this is how time works with LotFP and it got done in the end and that's all that matters.
This adventure is all about hobnobbing with clothing-obsessed rich folk and trying to find out why the bodies are piling up, without joining the pile. I thought the fashion angle was a novel framing device and gives everything a very distinct atmosphere, and it's delivered in a tight package that'll be good for a night or two's gaming, and I think it's going to sit very well in the LotFP canon when all is said and done.
Anyway, I am over the moon about how the book came out. It looks fantastic, as befitting a fashion-related adventure. Rich Longmore really outdid himself. The cover is one of the most striking in LotFP's history, the friggin endpapers and background texture are so so so so so good and how often do you see anyone bragging about such things? It has a candidate for the most exciting LotFP action scene pieces in its pages, and another picture that I think will become a signature of LotFP... you'll know it when you see it because it's just so jolting and gratuitous and hilarious (a combination which then comes around to being ESSENTIAL!).
And I love the idea that once this gets into stores that someone will randomly page through it and there's someone with a clock head in one piece of art, and it's never explained in the text because it's one of the PC stand-ins and so there's nothing in the book to explain it. And of the 7.9 billion people in the world, one surely will want to know what the hell is up, and what a rabbit hole they'll have to go down to figure out who that character is and why does she have a clock head. (Search for Portal Swarth in Youtube and watch the live video that comes up to find the basic inspiration for the look.) So I guess that's a bit of publisher indulgence thrown into someone's book, but hey, if you were hiring a group of player character adventurers, if one of them could break the laws of physics through the mystic arts... that they look a bit peculiar isn't the greater concern here.
And there's lots of art. Lots of it. And that's its own publishing decision. LotFP publishes books that are multiples of 16 pages for cost reasons, because of the way paper is used in the printing process (giant-ass sheets that are printed on, then it's cut and folded according to page size), if we did a multiple of 8 (I don't know if we can do four or two with stitch binding, but we definitely could with glue binding) it's still using the same amount of paper as the multiples of 16 and thus we pay for the paper, even we're not using all of it. Something like that.
So we get into a situation with these shorter books (and now speaking generally about all such books I've published, this isn't something unique to the book at hand) where 32 pages would be cramped and without the art needed to bring the ideas to life... but maybe 48 pages is a bit much to be efficient. So what do I do? Go for maybe a more efficient but uglier book? Let it breathe by filling the space with artwork? Tell the author to pad the word count so the text takes up more pages? Increase the font size? Or just use a multiple-of-eight page count and not care about the inefficiency in cost? Some combination?
It's a fascinating dance of economics, creative inspiration, information design, and art direction.
(The problem seems to disappear if we're talking about a decision whether or not to do a 144 page or 160 page book. Adding an art spread or three throughout that book to get something to 160 pages isn't even a concern.)
One cool thing about LotFP is that we look at these things on a project-by-project basis, with no predetermined look or format hard-coded into the "product line."
The case of this adventure, I think the "get it to 48" instead of "compress it to 32" greatly aided the entire presentation. The whole deal with macaroni fashion is rather visual anyway, and especially those notable late-page full pagers/page and a half art pieces would probably have never come to pass if we had 16 (or even eight!) less pages to work with.
#5 in a day or two! This is where it starts to get SPICY.
Posted by JimLotFP at 5:53 PM