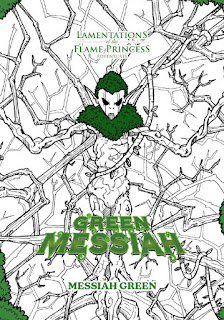 On October 25 we made 10 new releases available from https://www.lotfp.com/store/ ; eight for sale, and two freebies to entice purchase.
Packing and shipping from that initial avalanche of orders is ongoing, but I'm going to take a few minutes every day or two to explain why I decided to publish the items I did, and I will do so in order from what I expected to be the most generally acceptable to what I expect to be the most controversial.
Now coming in at #8... Green Messiah!
oh this one is easy. Kelvin Green is always a good time for an adventure. His material is always eminently playable, excellently crafted, and nails that balance of whimsy and creepiness that's unique amongst the LotFP rogue's gallery.
But when I read Green Messiah, I just went nuts. He'd outdone himself. I immediately started telling people that Kelvin Green was the RPG equivalent of John Landis and Joe Dante (directors who had made classic horror movies, and classic comedies, and often classic horror comedies...)... this was just next-level. Just pure fun, and horrible in the kinds of ways that I imagine general audiences would consider a good time and not just aimed at the core LotFP weirdos.
I even went so far to tell him that he'd be credited as Messiah Green this time around both because it's funny that it's just the title reversed, and because this time he was in God mode as an adventure designer.
I hope people realize what a gem Kelvin is as a creator... I'm afraid that people into the "oohhh we're so dark and have such anti-social imaginations!" LotFP stuff might be sleeping on him since he's not in that mode, and then I'm afraid that people who generally stay away from LotFP because of the same are missing out on things they'd really like. Whoever I'm accurately describing in this paragraph needs to get their head on straight right now.
As for the adventure itself... trying not to give too much away... I'll just say space elf swamp thing (this is one book you do judge by the cover!) and you'll get the general themes of the adventure.
All-time legend shit, this one is.
#7 in a day or two!
(why do I think one of the entries at the end of this series will have more engagement than the others?)
Posted by JimLotFP at 9:21 PM