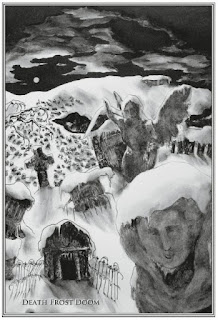 On October 25 we made 10 new releases available from https://www.lotfp.com/store/ ; eight for sale, and two freebies to entice purchase.
Packing and shipping from that initial avalanche of orders is ongoing, but I'm going to take a few minutes every day or two to explain why I decided to publish the items I did, and I will do so in order from what I expected to be the most generally acceptable to what I expect to be the most controversial.
First up at #10... the Death Frost Doom Throwback Edition!
This is a limited edition of 500 hardcover, thread-sewn copies, and will be automatically added for free to any order from the EU webstore containing eight or more items (any eight, not necessarily the eight new ones), while supplies last.
The explanation for publishing this one is rather simple... I thought it would be good to give incentive to buy all of the new items, but since some of the new items would be... difficult... I didn't want to strongarm people into buying books they might find objectionable, so I made it available for any order of eight or more items.
So this version of Death Frost Doom is the original adventure that properly launched LotFP, and was intended as an homage to Evil Dead and Night of the Living Dead (and, unbeknownst to me at the time I wrote it, the Lichway... someone sent me a copy not long after the original release to let me know about that.

). Across all printings and versions is one of our most popular titles of all time. The original version hasn't been officially available since the rewrite came out in 2014, so lots of people haven't seen it. Reprinting a classic title like this made more sense financially than commissioning an entirely new project that would just be given away for free.
So that's that.
(fun fact: Both Bridget Phetasy and my printer for some reason call this adventure Death Frost Room. Don't ask me why.)
#9 in a day or two!
Posted by JimLotFP at 8:05 PM