The Carcosa Problem: The Haves and the Have Nots... or, Humans Are Not Cool

When I got the original edition of Carcosa back in 2008, the view I had of the setting was one of primitive man armed with sword and vile sorcery making its way in a cruel, cruel world.

There were pages and pages of ray guns and technological marvels and all the things the Space Aliens, Great Race, and Primordial Ones have made.

Mentally I treated those things the same way I did most of the magic items and high level spells in D&D - almost background noise, stuff that I suppose is in the setting, somewhere, but nothing that will ever show up in a normal campaign.

But that's not right, is it?

And on a pure in-setting level, you have all these advanced races that ruled the world for aeons, most of them are still around here and there. There's a lot of this stuff to be found.

I think to decide that the PCs won't ever really take on Cthulhu, or that they shouldn't ever drive a tank, or that the rituals should be assumed to only be used by NPCs removes a little bit about what makes Carcosa special. It's making sane what was clearly designed to be utterly insane.

But humans are primitive on Carcosa. They can't make any of this cool stuff on their own.

To me this creates a power disparity on Carcosa. The haves and the have nots. Who has discovered and mastered some of this superior technology, and who has not?

And how to depict both the primitive nature of humans and the access some have to the advanced tech? 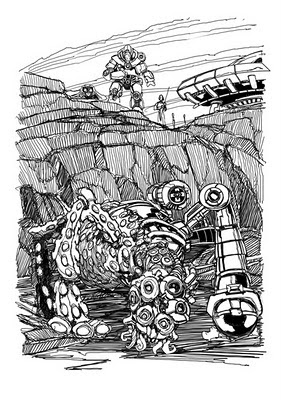 One thing we needed to get in there was a cyborg Spawn of Shub-Niggurath. Them wacky space aliens, right? 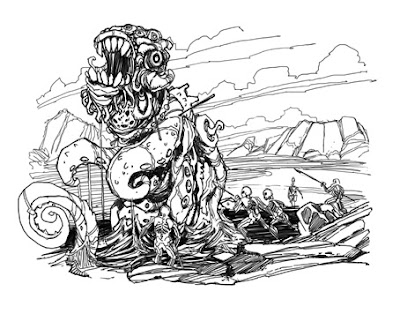 Talk about have-nots, Bone Men look like they don't even have skin...

I can't help but address something else as well. The 300 Carcosa pic that Rients first posted is cool and all, but there is a reason why that sort of thing won't be in the book:

Geoffrey's art guidelines said that humans should be depicted only in certain ways (killing other humans in a ritual, getting victimized by a monster, looking up in horror at some horrible thing)...

"Carcosa is certainly not a planet in which adventurers 'pose for the camera.'"

These guidelines are obviously not unbendable, as Geoffrey approved these two pics here and they seem to not fit any of those things. But notice that humans are still second banana to other things in the pictures. The Bone Men are tiny in comparison to the beast in the second picture and one can imagine all it has to do is sweep a tentacle and the men are in a world of hurt. The humans in the first picture are completely obscured in technology, and the focus of the pic is the weird creature in the foreground.

In play, PCs are going to try to make their mark, do all the cool things, become powerful. A bunch of art showing how cool the PCs could be would be conveying exactly the wrong message though. The book's job is to communicate the setting. And on a setting level, humans just aren't that important in Carcosa. Yet.
Posted by JimLotFP at 11:34 AM