Hmmm. It's a difficult subject, creative freedom. Too much? Not enough? Read Zak's post about Why Caverns of Thracia is the Best Published Dungeon and Shouldn't Be, as well as Aeons & Augauries' Breaking the Mold. Recent rumblings have been about here and there.

Truth is, I really don't like bold experimentation. To me, originality is a completely different thing than creativity, with creativity and the imagination that drives it better served personalizing and creating variations on familiar, favored themes.

Which might be rather obvious, especially in light of the fact that I've spent the past four months refinangling the thing I spent the previous six months putting together. But the creative impulse is still there, the drive to just drive people nuts with things they've never seen before - the need to impress - but it's equally tied to the fact that I'm really not all that interested in entirely new things.

I'd be more than happy to watch 34348923789473 zombie movies in the Romero vein as long as they kept to consistent "rules." I'd rather see a greater world of such a thing than zombie movies with "original ideas" that "break the rules." I think there are an infinite number of good stories to be told within that universe without needing any more "originality."

The idea of continuity and canon are, to me, the only justification to continue reading the same comic character for decades on end. The fact that they goof around with retcons and reverse deaths and all that is why I really don't read comics although I have an almost desperate need to - and so only get the 20+ old reprint editions.

I like heavy metal of only certain types - identifiable by the fact that they are all rather similar. Yet bands are also infinitely unique, even when purposefully aping another band's sound. I can go on and on about the subtle differences that make one album great and another suck even though one could swear there's no appreciable difference. I could discuss Black Sabbath vs Lord Vicar vs Candlemass (especially From the 13th Sun) all night, and would rather find another twenty bands of that pedigree and explore their nuances than catch on to some new thing and have an entire musical genealogy to explore from scratch.

I realize that the most important thing about RPGs is their stimulation of the imagination; that is the only thing they are good for. What is "good writing" or an "imaginative idea" can utterly fail where a bog-standard idea sloppily presented could result in a superior gaming experience. As a writer it's a maddening thing, realizing that Keep on the Borderlands is a much better adventure in practice than any of the UK-written D&D modules, even though I find the UK series to be "better" in every way that I would count in how they are crafted.

So while I'm sitting here in my attempt to take something that most of you thought was pretty good and make it perfect, these things weigh heavy, especially as I work over those sample monsters, sample magic items, and the new intro adventure for the new box. Trying to inject the proper atmosphere, trying to really unlock the mind and get into the thinking of "no limits" without injecting the whimsy I often indulge in (the giant at the bottom of the pit from Death Frost Doom in the first printing, the entirety of Green Devil Face #1, my film review from earlier today) and trusting that I can make something that's both imaginative and serious. Show you a thing or two you've never seen before while making sure it also feels familiar enough to be immediately useful.

There's still that cleanup work for the new box, plus I have four projects worth of manuscripts from three authors that are more or less complete that I haven't really looked at yet. 2011 is going to be a busy year.

I'll leave you with another art preview, received literally while I was writing this blog post. It's for the new intro adventure A Stranger Storm (which I ran as an in-store game for some very freaked-out players), and just to get you worried that much more I will tell you that the adventure does not assume what side the PCs will be on in this struggle because events will conspire to make it a rather difficult choice. Nobody in this picture is evil or insane or doing an inarguably wrong thing. In this adventure, the stakes are high, the decisions difficult, and the opposition weak. It's time to get Weird. Thank Amos Orion Sterns for this one: 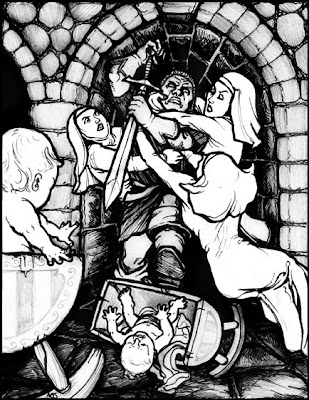 OK. Holiday over. Navel-gazing over. See you soon.
Posted by JimLotFP at 12:06 AM