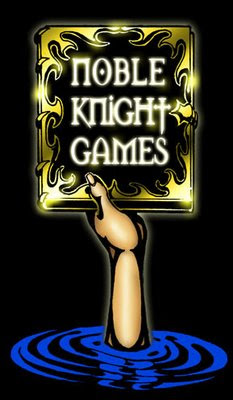 I'm no good at press releases and hype, but I do want to say that this is really frickin cool and I have been bouncing off the walls for the past week waiting for confirmation that sample copies of Death Frost Doom and Green Devil Face #1 and #2 had arrived at their offices and that the arrangement was a go. Noble Knight has been my online store of choice for many years now, and I've never had anything less than stellar service from them, whether I was living in Atlanta, Orlando, Vaasa, or now in Helsinki.

I expect this will be beneficial from a business standpoint, as I have no doubt that many more people will become aware of my work due to its presence on Noble Knight's site, and I also have no doubt that many people hesitant to order from some guy on the web will feel much more confident ordering from NK. Noble Knight will be labeled as the "official North American distributor" in all release announcements and on the LotFP site storefront.

The first shipment to them will go out as soon as my business establishment paperwork is cleared here.

I've also approached Noble Knight about creating a category on their product list to collect all the new traditional items under one heading for easier browsing. There are already a number of products available there from various companies (and hopefully more to come!) with nothing to indicate that they are for the same family of games, and I thought the situation could be easily corrected.

The question is... what to call this section? (the arguments of the past weeks aren't so pedantic now, are they? :P) I think "Old School Renaissance" would fit perfectly as its been in use for well over a year now, but I thought some Community Discussion might help rather than me acting as Secret Independent Plotter with the seller guy. :)
Posted by JimLotFP at 9:00 PM