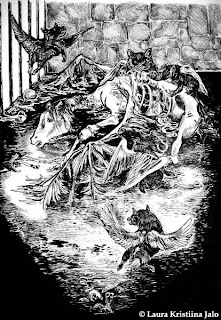 It's going to be that kind of adventure.

Illustration by Laura Kristiina Jalo. Eight more to come. Although I'd better stop being so excited about them and posting them immediately or else there won't be any surprises when people get the actual thing. A note about the artwork: She's working from written descriptions taken directly from the text. There are no lame "Jim sketches" to work from this time. The exact text I gave her that she used to produce this picture:

The PCs will first come into this room exactly four days after the pegasus gives birth. The room is mostly bare, with a cage with great iron bars taking up the majority of the space. In the straw-lined cage is the pegasus’ vacated body (wings entirely stripped of feathers) against the back wall, five small flying dire wolves alternatively tearing at a piece of meat and flying about the 20’ tall room. The door of the cage is chained and locked shut. Human and goblin bones line the cage and bloodstains are everywhere. When the PCs enter the room, the wolves will begin howling, which is cause for a wandering monsters check, and the witch doctor and his guard will arrive in 1d6+4 rounds if they have not already been dealt with.

There are also some fun things to come. Some instructions I'd given to her: "The goblin kitchen and torture chamber are the ones I'm most concerned about, as far as the right atmosphere. This will sound weird to say... but the stuff I'm writing is for a game that's been out of print for 20 years... so most of the people that end up buying it are going to be fairly old... and I want them to feel queasy and sick looking at this."

It was my original goal with Insect Shrine to make the best damn adventure people had yet seen from the new wave of simulacrum products coming out and to make everyone else seem lazy... in 2006. So I guess I've failed on the laziness score.

But writing progresses again now that I've got a collaborator working on the visuals, and I can tell you... my goal isn't really to make the best damn adventure that people have yet seen from the new wave of simulacrum products. No no no. After all this shit, all the trouble, and all the stupidity I went through in life between the time I announced it and now, I fully intend for Insect Shrine of Goblin Hill to stand with the classics.

This adventure is full of death, despair, violence, cruelty, corruption, grief, a dark oppressive atmosphere, weird science, a blasphemous religion for a mad god, an impossible challenge, no-win situations, gallows humor (yeah, "I don't want to go on the cart!" is funny... unless you're the one saying it) and maybe, just maybe, the chance for wealth, power, and/or glory. Get rich or die trying. Death before dishonor. Everything that critics of role-playing accused it of being and everything its practitioners knew it really was.

I will succeed wildly or I will fail miserably. All or nothing. Going for broke.

Insect Shrine of Goblin Hill. Coming whenever it's done... because I'll probably get all excited about the Stone Hold Asylum adventure when Aino starts turning in that stuff. :p