Details on the New Releases Out Oct 25, Plus Livestream Oct 24! 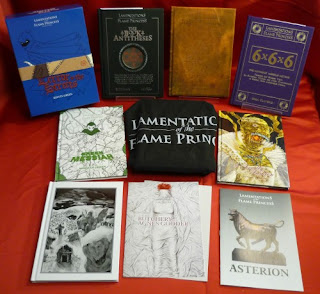 Once more unto the breach!

On Monday October 25th is new release day! Eight new books for sale, and two bonus items to encourage you to get in on the new stuff early!We'll be introducing the new books in a livestream Sunday October 24 at 21.00 Finland time on the LotFP Youtube channel.We previously had started our pre-release hype detailing The State of the LotFP Union (blog, Facebook) as well as The Strength of LotFP (blog, Facebook).We'll also be offering the Adventure Anthology slipcase as a separate item for sale when the new books go live.The freebies will be The Butchery of Agnes Gooder, which will be put in the first 500 orders, and we've done up a special hardcover reprint of the very first printing of Death Frost Doom, which you will get free if you order any eight items at once (any eight, not necessarily the eight new ones) after the new items go live (limited to 500 copies).The titles for sale are:6x6x6 The Mayhemic Misssile Method by Ezra Claverie: Customize and expand your Magic-User's offensive potential with this arsenal of options! Presented as a beautiful clothbound hardcover with terrifying and wondrous art by Yannick Bouchard.Asterion by Kristopher Carosella: A zine-formatted release concerning a very classic monster. Limited to 500 copies.The Book of Antitheses by Jobe Bittman: This is the damndest thing. Mostly an adventure, but also the ultimate guide to unlocking the magick of role-playing! Extensively illustrated by Grammy-nominated artist Benjamin Marra, with a foreword by JF Martel.Green Messiah by Kelvin Green: A botanical adventure set in the English countryside, with possible global implications!In a Deadly Fashion by Courtney C. Campbell: High fashion meets stark terror in this adventure set in Seville. Brilliantly illustrated by Rich Longmore.The Staffortonshire Trading Company Works of John Williams by Glynn Seal: An extensive collection of maps to bring the Early Modern to life in your campaign!Terror in the Streets by Kelvin Green: An adventure set in 1630 Paris, available as either a hardcover book or limited edition deluxe boxed set which includes the main adventure hardcover plus an additional hardcover book, props, and a custom die.And one adventure by Alex Mayo that we will be keeping secret until everything goes on sale. It's a belter.The limited items will not be going through the distribution chain or be available from the US webstore, and the rest probably won't reach the US warehouse until after the new year. Never fear though, we ship worldwide from the EU webstore and over the summer we reached agreements with several shipping companies to get our parcel shipping prices as low as possible!
Posted by JimLotFP at 9:47 PM

New comments are not allowed.