'allo...
It's art time! Here I parade what I like best about traditional gaming art. This serves two purposes - to dispel the idea that line art is for some reason inferior, and to serve as a handy primer for any prospective artists that I might want to work with in the future. I don't really care if someone is into RPGs, I care if they're good, and I can just link them to this and be done with describing the feel that I want.

First, read this. Really. It's great. Then read this, especially Matt Finch's comments. That's great too.

Onto the comments on the masters. Just to note, I normally wouldn't just copy stuff like this wholesale, but I did find it in various weird places on the internet in the first place, so this was like a second-hand swiping.
JEFF DEE

I always liked Jeff Dee's art. It is extremely clean, devoid of unnecessary lines and distractions, without seeming incomplete or empty. Some of his better fantasy drawings: 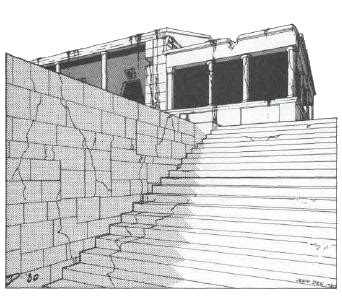 This pic from module A1 Slave Pits of Undercity is just a perfect introductory piece of art. I love that this illustration actually has a good bit of detail, and it shows that Dee is professional and proficient (I can imagine a lot of artists these days making a complete mess of a simple idea like this). No action, no fantasy, no nothing except an atmospheric location. 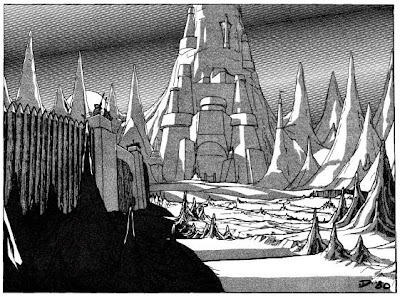 I believe this one is from Q1 Queen of the Demonweb Pits. I like it for much of the same reason that I like the previous picture: It gets across the feel of a location while at the same time not skimping out on delivering a realistic quality to it all. Dee's environments are easily of "better quality" than his figures, realismly (I invented a word!) speaking. 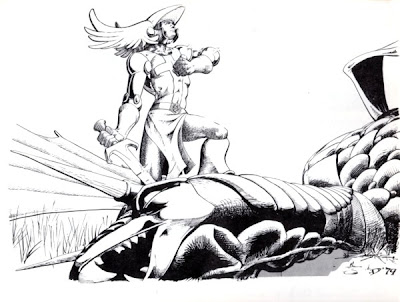 I don't think I've ever seen a picture so... so... inspiring before. I mean, at least as far as making me want to play a paladin. Come on, this is awesome. It just explodes with righteousness. The evil black dragon has been slain, and the noble knight has suffered nary a scratch.

Although I will admit, his helmet bothers me. His boots, not so much. I mean, can't blame an artist for being a wee bit influenced by the times he lives in, even when illustrating something outside of time. But that helmet? Not buying it, man. It's not even the wings... it's the visor or whatever the hell that thing is. 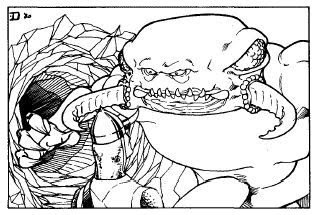 Best. Umberhulk. Ever. Everything you need to know, from its preferred environment to its special power, is right there. Dude's about to get chomped. 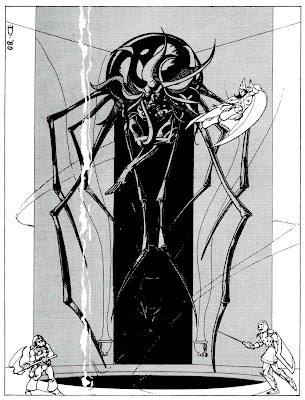 Dee wrote and illustrated two superhero RPGs (Villains and Vigilantes and Living Legends). His love of that genre is really on display here, cape and all. Still, it does show exactly what it needs to (from D3 Vault of the Drow, I believe this is in Llolth's Fane?), as this kind of thing is better shown than described. 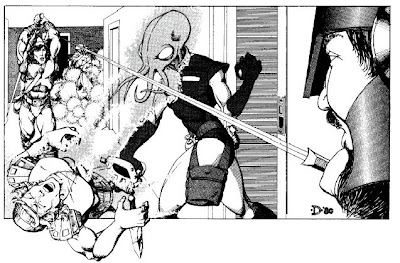 From S3 Expedition to the Barrier Peaks. Note the border-busting framing of the picture. Note the completely alien (heh. heh. heh.) portrayal of the mind flayer, completely against how it's usually illustrated. It really gets across the theme of the module. 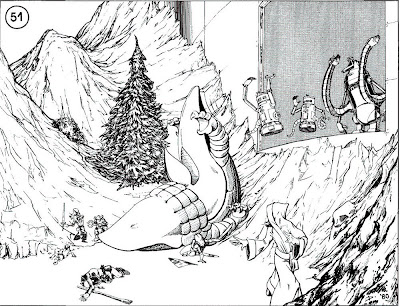 Another from Expedition, and this is the most awesome picture in the history of Planet Oerth. Pure What the Fuckery. Note the detail of the surroundings is every bit as vivid and attended to, even though surely nobody is looking at it, what with GIANT ROBOTS throwing a BULETTE out of a FRICKIN SPACESHIP and in the laps of our hapless adventurers. Cheat Commandos, Rock Rock On!
DENIS LOUBET

Not associated with Dungeons and Dragons at all, but Denis' work with Origin Systems and the Ultima series surely made his imagery as much a staple of fantasy gamers' imagination as anyone else's. 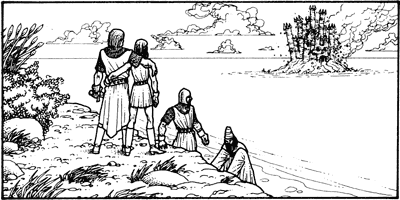 Solid line work, solid detail, solid composition. A shot with no action and no posing may not impress the everygamer, but it's this kind of consistent work, presenting a world that could exist, that makes me love Denis.

I wanted to marry this girl when I was 12. Note the more natural pose for a class "icon" than you'd likely get these days.

I want to marry this girl RIGHT NOW. 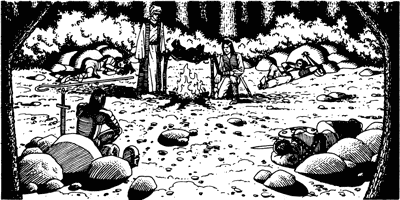 Another illustration of an activity that is part of every adventurer's life, depicted as it would be if it actually happened, not all dramatized and sillified.

A Loubet action shot! A bit stiff, admittedly, but still gritty. Loubet is very meat-and-potatoes in a genre where meat and potatoes are often seen as undesirable. Have I mentioned his consistency? :P 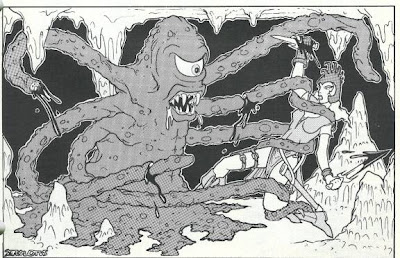 "Now with 100% less art"? GO FUCK YOURSELVES. This picture sells the roper and its fearsomeness more than anything else ever has.

What the hell is this? I don't know. Are they squabbling merchants or soon to be feuding wizards? It just exudes magical flavor. All of that stuff has a story, and this picture makes me want to find out (or make it up!) for myself. And those figures... realism be damned, they are part of another world... 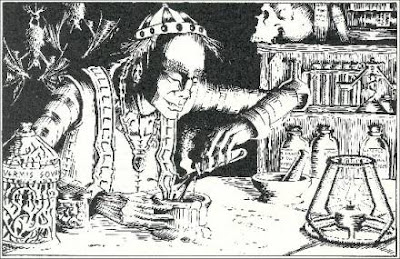 Another "every alchemist does it, and every other artist overdoes the showing of it," example where less is more. Nothing interesting is happening, but the illustration is jam-packed with interesting all the same. 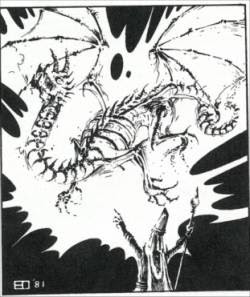 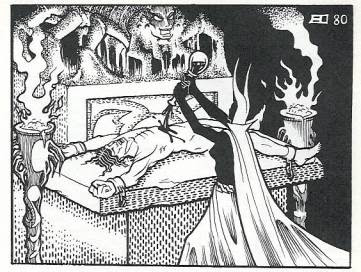 One thing that Otus is great at doing is filling all of his pictures with the sense of overwhelming evil and doom. Even his village picture above gives the feeling that something just isn't right, and the distortions of the merchants and alchemist above give a sense of corruption that isn't obvious just from the basic composition of the piece. This gives it all - the location is evil, the action taking place is evil, and the figure performing that evil action is otherworldly, while the victim looks like a regular person. Excellent. 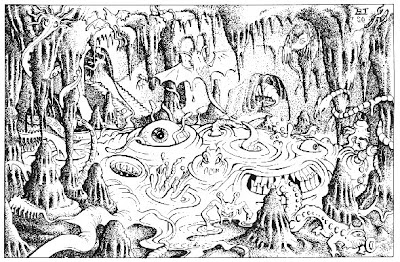 Erol Otus is the only person that has ever (OK, maybe also Michael Whelan) illustrated Lovecraftian gods correctly. If I'm ignorant of others, please tell me. But Otus is among the masters. 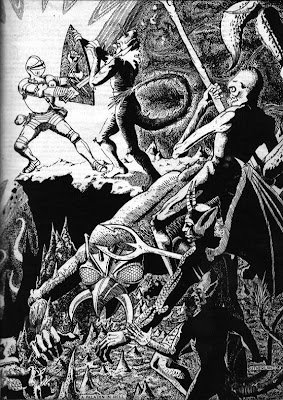 I hate to speak ill of the dead, but I was never so much a big fan of the majority of Sutherland's work in the D&D books. However, this one picture more than makes up for everything else. Talk about an iconic, larger than life illustration that brings a game out from the pages and directly into the imagination. Whereas Dee showed the nobility of the paladin and Loubet showed the piety, Sutherland captures the crusading power of the class. This is one of the few pictures that you can show all by itself and say, "This is D&D!"
DARLENE PEKUL

Other artists have given the D&D game an atmosphere that is irreplaceable, simply by lending their style to the game. Darlene's style is in some ways complimentary and the extreme opposite of Erol Otus' work. Whereas Otus showcases the corrupt and macabre, Darlene's work makes everything into a fairytale. 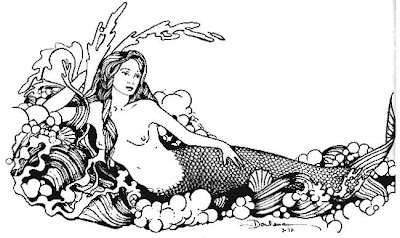 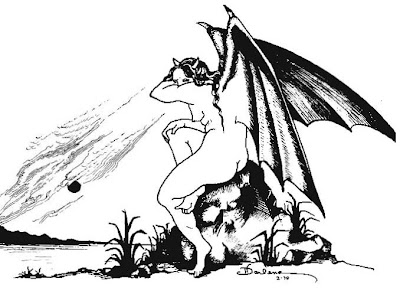 This illustration takes an evil creature (a succubus) on an alien world (note the black sun), and turns it into a vulnerable and sympathetic creature. How awesome is that? I also like how the woman's body doesn't have so much detail beyond the outside lines, and it still seems complete and correct. Less is sometimes more, but great is always great. 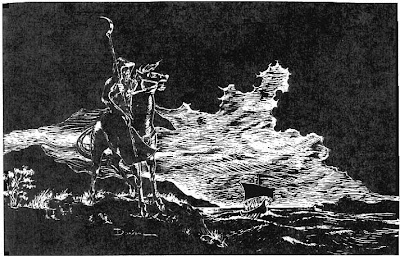 I really don't have a lot to say about this one... because I don't think I need to say anything. 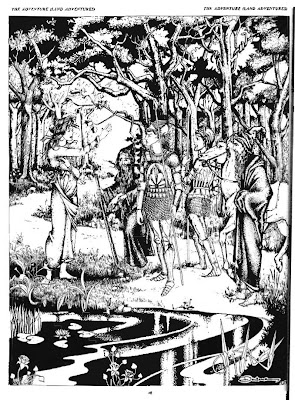 I love how the adventuring party is shown as unintimidating as possible. Look at the old men! I also love the detail of the background. I loves me some background. When as much detail is shown in the things you're not supposed to be noticing as is shown in the focus of the illustration, you know you're dealing with an artist that cares.

The master. No comments needed. 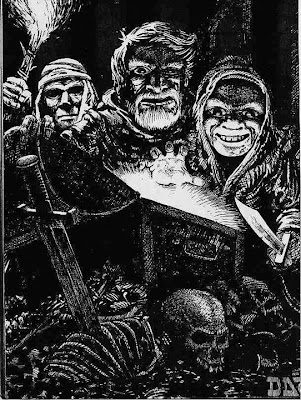 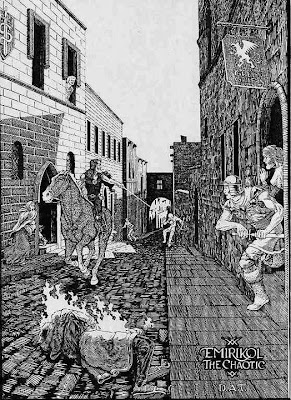 This last one is a Tramp work, correct? I've never seen it properly credited... anyway, this is the absolute best visual representation there has ever been, and ever will be, describing what Dungeons and Dragons is all about. No question, no argument, the end.
Awesome.
Posted by JimLotFP at 3:00 PM