The updates over at the IndieGoGo campaign site have been speeding up, and thought I'd throw them up here as well. (Pledging gets you both adventures plus Green Devil Face #5... and although I don't have much to show you yet, that Alfrey poster is going to be something else!).

The God that Crawls Map Preview #1

The rough prelims for the God that Crawls maps have been completed. Here’s a teaser (small enough that All The Secrets aren’t given away!).

I think these maps are the most complex maps I’ve attempted. Carcosa and Weird New World may have had been on a grander scale, but each of these dungeon levels has dozens of connections going up and down, meaning lining them up and making sure the map works requires an attention to detail that “color this area dark blue to indicate climate” doesn’t – if Weird New World’s hex colors were off one hex nothing broke; if one of these stairs don’t line up the adventure is in trouble.

Funny that the cartographer (James Hazelett) immediately noted upon seeing my hand-drawn scans that this reminded him of the old Ultima dungeon maps. The influence is strong, as the Ultima IV-V era probably is as big an influence on my gaming as D&D.

Note that these are just the barest roughs just to make sure we have the connections and relationships between levels. The final maps will be full color with extensive keyed bits (room numbers of course, plus treasure locations, various physical abnormalities noted on the map, aids to keep all the stairs and ladders lined up) to aid the Ref in running the adventure. If all goes to plan (cross fingers), these bits which should be layered with every category of map element able to each be switched on/off in the PDF version.

The Aeron Alfrey poster (for the Psychonaut and higher contributors) will be Monolith-related. Depending on space needs, the picture may appear within the Monolith itself, but the poster will be 16 times larger, so the detail will be far greater.

I’d hoped to have more to show you at this point, but this is LotFP and the schedule is a mocking bastard.

But a big step forward has been made: We’ve finally got pics that will be used for the characters in the piece.

As anyone who’s looked through the Grindhouse Edition knows, Alfrey uses photo manipulation as part of his work, and I wanted to make sure the faces used were familiar this time.

Luna (who has previously been the reference model for the snake demon on the LotFP box cover and Grindhouse medusa pics – I do believe this is her clothed debut for LotFP!) got into costume and took over 200 shots for the piece to give Aeron a good amount of material to work with. Here is but one sample… 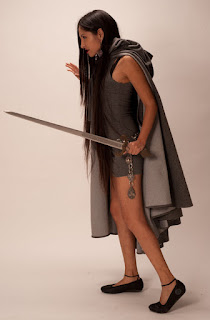 The God that Crawls Cover Update


My idea for the cover was along the lines of some King Diamond album covers (Them, Voodoo), a bit of brooding menace showing a location important to the adventure without showing what happens during the adventure. I do that a lot, don’t I?

That said, we do still need some “spice” to make this Cover Art rather than just a picture, so the final version will be a bit peppier in a way that doesn’t compromise the basic idea. 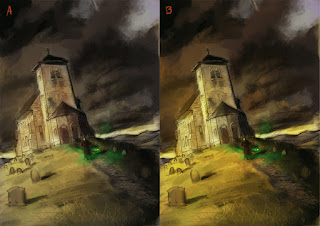 The God that Crawls Art Update #1

The maps for The God that Crawls will be included in a full color four panel glossy foldout… and I couldn’t just let the other side be blank!

Here’s the prelim sketch for the back-of-the-map pic by Jason Rainville. Details will be changed, and it’ll be in color, but I was blown away and thought you guys should see this ASAP! 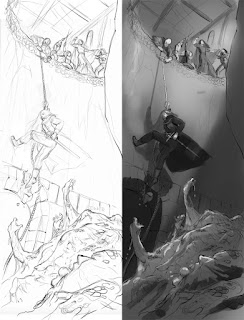 Email ThisBlogThis!Share to TwitterShare to FacebookShare to Pinterest
Labels: The God that Crawls, The Monolith from Beyond Space and Time