The Mayan Calendar Is Wrong... The Universe Ends December 2011... CARCOSA IS AT THE PRINTER! 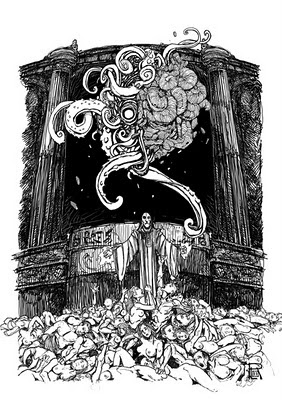 It's done. At the printer. Coming early December 2011.

Hardcover (thread-sewn binding) with a foil-stamped cover, 288 A5 pages, beautifully designed, generously illustrated... you will bow down in AWE of this thing.

And it's not just going to be a pretty physical item. It's been expanded, reorganized, extensively cross-referenced and indexed. Seriously, Eero Tuovinen has been a damn SUPERHERO preparing this book and making sure it's a thing of both beauty and utility.

I am so excited about this, not only in being able to re-release Carcosa and get it out to a wider audience, but in sparing no expense in making sure it was released in a format that did its contents justice.

Carcosa is a big fucking deal to me. It was the first thing that showed me that this whole old school thing was not only about reclaiming the respect and fan base and not being treated like backward morons for the games we like to play, but that we were going to surge forward and be more than a shadow of days gone by.

The Carcosa controversy was raging when I had the first date with the woman who became my wife. Poor girl had to deal with me taking Carcosa out at the restaurant and ranting to her about how awful and small-minded a lot of people were and that this thing was awesome and those people were wrong!

I feel so excited that this thing is out the door. So full of energy, like this is a weapon that will conquer the world and beyond.

I can't wait to show this thing to you all.

Goddamn I have the best job in the world.
Posted by JimLotFP at 5:01 PM